We Love Oakland: Looking Back on Blue Shield of California's First Year (and More) and the Friends We've Made

From its majestic hills to the east to Jack London Square to the west, Blue Shield of California is celebrating all things Oakland on the first anniversary of our headquarters’ move.

We’re looking back – and ahead – to the community and neighbors that have welcomed us. And we’re grateful. From the day we announced we would move our headquarters to our new home in the heart of downtown Oakland, we’ve poured millions of dollars and thousands of volunteer hours into the city to show our appreciation. 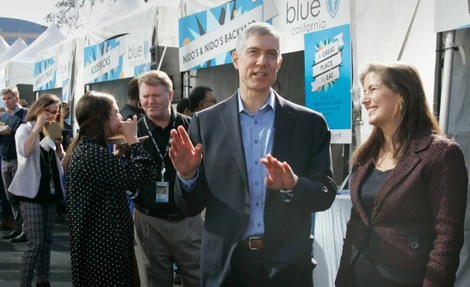 “We knew the move to Oakland would be an adjustment, but we had no idea of the social, emotional, and health challenges in store for us when we opened the door to our new headquarters late last year,” said Paul Markovich, president and CEO of Blue Shield.  “We look forward to working with our neighbors and community leaders to address this pandemic and create both a health care system and a society that is worthy of all our families and friends.”

Blue Shield’s journey from San Francisco to Oakland began long before more than 1,200 of our employees arrived at our new eco-friendly building on 12th Street at City Center. Long before the move, we embraced the city with volunteer efforts, partnerships, and new policies reflecting the diversity of the community.

Our commitment began in 2017, not just with a lease, but with our people.

Oakland Promise is a mentor organization that pairs professionals with high school-age students. In 2017, the first of more than 35 mentors from Blue Shield began working with students from Oakland.

“I was excited about the opportunity to help shape a young person’s life for the better,” said Vanessa Ogbu, a senior manager at Blue Shield, who was one of the first to volunteer.

“Blue Shield of California has shown up, investing generously in our work in a holistic way and setting an example to inspire other corporate partners,” said Mia Bonta, head of Oakland Promise. “With over $1 million dollars in financial support, nearly 40 employees serving as life-changing mentors to our students in college, and continued thought partnership, Blue Shield is making our promise to Oakland’s children a reality.”

That same year, 200 Blue Shield employees donated their time to build playgrounds in Oakland that serve more than 1,000 kids.

In the months that followed, we joined with the American Heart Association, announcing a three-year, $750,000 program called “Make Time for Health.” Since 2018, the program has reached more than 2,000 third- to fifth-grade students in the Oakland Unified School District,  teaching healthy habits including a tobacco-free lifestyle, increased physical activity, and balanced nutrition.

“Working with students to provide them with tools for physical and emotional well-being is critical to their academic success,” said Alden “Chip” McDonald, M.D., board member of the American Heart Association, Bay Area Division.

In 2018, more than a year before our move, we already were engaged with our new home. We invited interns from Oakland’s Cristo Rey de la Salle East Bay High School to work with us. And we launched #80 For Oakland, a campaign encouraging more than 1,200 Blue Shield employees in the Bay Area to support local businesses, visit Oakland’s amazing neighborhoods and landmarks, volunteer, and share their experiences on social media. The name, #80 for Oakland, celebrated not only Oakland, but also Blue Shield of California’s 80th anniversary.

By the time our move date rolled around in late 2019, Blue Shield and our employees were already deeply invested in our new home town. 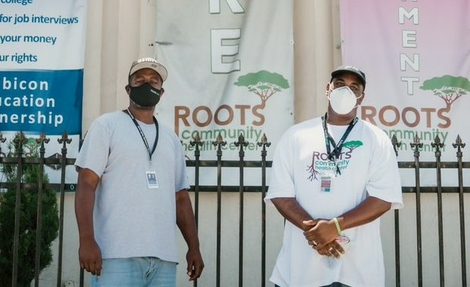 Workers at the Roots clinic in Oakland

In another venture with the American Heart Association, Blue Shield donated a free-of-charge blood pressure kiosk for East Oakland residents at the Roots Community Clinic. In just the first three months, since its unveiling in February 2019, more than 200 people used it to measure their blood pressure;  69 percent found they had hypertension and began receiving the treatment they need.

A second kiosk opened in December at the Roots clinic at 73rd Street and MacArthur Boulevard.

But community health wasn’t the only area in which Blue Shield was making investments. In March 2019, we made a commitment to minority-owned businesses. We raised our target for diverse supplier spend to 12 percent of our procurement budget by 2023, up from about four percent in 2018 – roughly $100 million in spending.

And that was just the start to a very busy year. We built more playgrounds, sponsored summer camps, and raised money for the community.

“I was thrilled, and so grateful that Blue of California donated $5,000 for our school,” said Dana Turner, EnCompass Academy. “This means so much to know we have such support in our community to help our school’s vision of teaching and reaching the whole child. Thank you, thank you.”

Blue Shield officially arrived in Oakland in October 2019. There was a street fair, a welcome form Mayor Libby Schaaf and other local leaders. There was a lot to celebrate. Not least among them, more than 650 employees volunteered over 3,700 hours at local nonprofits to support the Oakland community during 2019 and made even more trips to local businesses, as made evident by more than 100 social shares in the #80ForOakland campaign.

At the same time Blue Shield launched Blue Sky, a multi-year effort to stem the tide of mental health issues among school-age youth. BlueSky was started in collaboration with the California Department of Education and nonprofit organizations such as Wellness Together, National Alliance on Mental Illness, and DoSomething.org. Oakland figured big into this effort, with resources including one-on-one counseling poured into schools in Oakland Unified and San Leandro Unified school districts in Alameda County.

“Blue Shield is an extraordinary partner, not just with resources that have provided for some student technology needs.” said Amy Cardozzo, principal at Coliseum College Preparatory Academy in Oakland, which participated in Bluesky. “Blue Shield has shown a commitment to our partnership by leading out on what it means to be for students and families.”

Since its launch, BlueSky has yielded impressive results, including more than 430 counseling sessions a month on average. The program has thrived even amid a pandemic that kept students out of the classroom.

Our response to COVID-19 in Oakland

Just four months into our new home, Californians began to grapple with COVID-19. Blue Shield’s response was swift – even though Blue Shield employees were ordered to shelter in place like the majority of Californians. Blue Shield responded by redirecting our efforts to community health. We’ve invested in testing, equipment, and more to help Oakland residents live their best lives amid the pandemic. 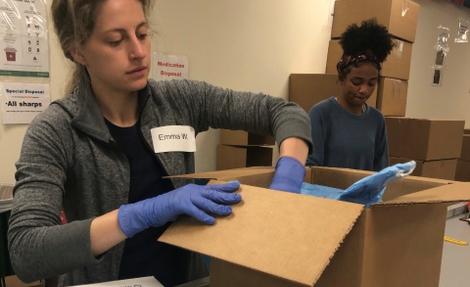 When the COVID-19 emergency took hold, Blue Shield grantee Alameda County Community Food Bank experienced a 1,000 percent increase in calls to their emergency food helpline – more than half from households that had never reached out for help before.

The Food Bank’s Executive Director Suzan Bateson, described Blue Shield’s efforts this way: “When the COVID-19 emergency took hold, we experienced a 1,000 percent increase in calls to our emergency food helpline – more than half from households that had never reached out to us for help before.

“As an organization in our community that understands the intersection between health and hunger, Blue Shield and its employees have been key partners and their support will be critical for the duration of this crisis, and beyond,” she said.

We’re proud of our involvement and our home. And we’re humbled by our welcome. We have more planned for 2021 and beyond. It’s been a great year (and more). We can’t wait to share what’s coming.

Ultimately, that’s what you would expect from a good neighbor.