Natalie Miller’s family of four had a roof over their heads, but that’s about it. For four years, the Pomo Indian family was living in a trash-filled campsite in Lake County with no running water or kitchen. But with the help of the Scotts Valley Band of Pomo Indians, Miller’s family was able to move into a subsidized apartment through the Homekey initiative. 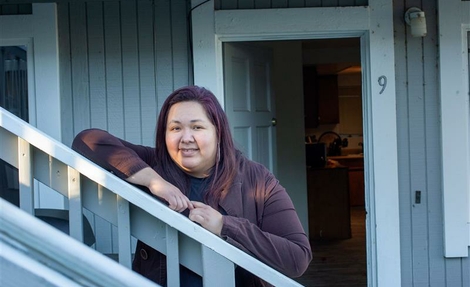 Homekey is an $800 million California program started during the pandemic to construct or transform existing housing into emergency homes. Blue Shield of California contributed $20 million to this massive effort, which has helped place thousands of Californians experiencing homelessness into secure housing over the last year-and-a-half.

Before moving into the subsidized two-bedroom apartment for $450 per month, Miller would have to fill up a five-gallon bucket with drinking water for herself, her partner, and her two young sons. Her family shared an outhouse with other homeless families at the campsite where they stayed.

Miller remembers walking into their new apartment for the first time and breathing a sigh of relief. “I worried so much about my children not having a home,” she said. “I would get so stressed out that I would get sick to my stomach and get headaches. Now we have a bathroom, a kitchen to cook vegetables, and we’re not living around trash. We’re living so much healthier.”

Antoinette Mayer, Blue Shield’s senior director of corporate citizenship, stressed the link between housing and health. “Having a safe and stable home is a big determinant of positive health outcomes. Those experiencing homelessness – who are disproportionately Black, Indigenous, and people of color – often have significant challenges maintaining physical, mental, and emotional well-being.

“However, when people have a home, parents can focus their attention on getting a job, kids can focus on doing well in school, and everyone has a far better shot at sustaining good health, she said. “And that’s why Blue Shield of California made such a significant investment in housing people experiencing homelessness.”

For Miller, getting a Homekey apartment may have saved her life. She was hospitalized with COVID-19 only a month after she moved in.

“I’m so thankful we had a home,” said Miller. “My kids had a place to stay, and their dad could take good care of them while I was in the hospital. Most importantly, I had a place to recover. I don’t know what we would have done if we didn’t have the apartment.”

The home in Pomo culture

Having a home is important for anyone, but it is symbolic to Miller. Katie Ray, the Family Wellness Advocate for the Scotts Valley Band of Pomo Indians, manages the Homekey site and spoke about the historic trauma that many Pomo Indians experience. “The concept of home is tied to the land, and that land was violently taken away. It’s a source of intergenerational trauma, and it’s so important for Native people to have a sanctuary to feel safe and secure from the outside world,” she said. 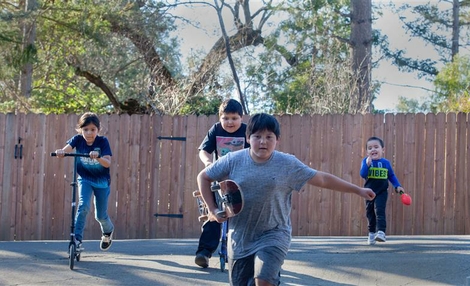 Homekey has allowed the Band of Pomo Indians to provide people with a roof over their heads, a place to settle in, and the ability to focus on their future. Once someone is housed, the Band of Pomo Indians helps families with education, job searches, addiction treatment, and transportation to doctor appointments. Having a home is a jumping-off point for other services to get folks on their feet.

Miller agrees that having a home will allow her to tackle some of her family’s other challenges. “The apartment is only two blocks from my older son’s elementary school, so he can be on time, and I can enroll him in sports. My younger son won’t remember being homeless. My partner can look for a job. And I can go back to school and learn computer skills. I have a good feeling, and now I can focus on building a future instead of stressing about being homeless.”