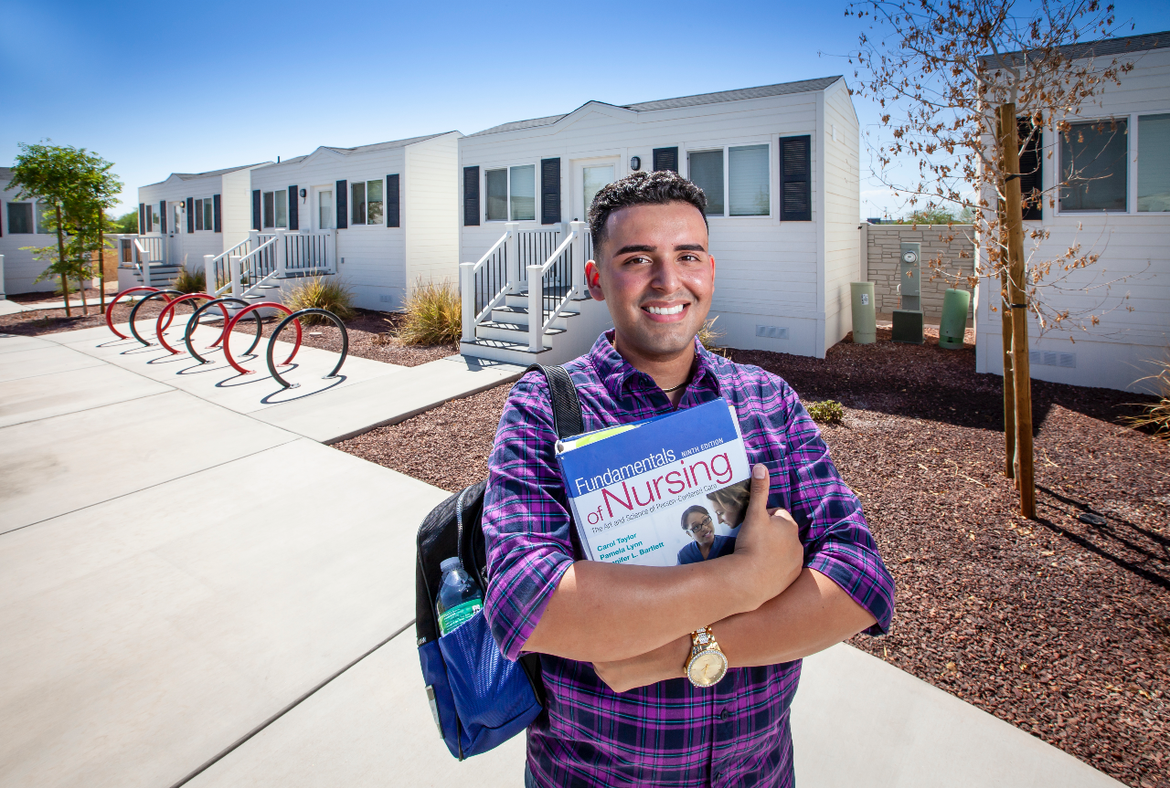 In many ways, Jorge “JJ” Chavez is your typical college student. Enrolled in the nursing program at Imperial Valley College (IVC) in Imperial, the 21-year-old is worried about everything, from getting good grades to making friends to figuring out how to manage his time. Chavez is a success story of someone who faced homelessness, but with the help of resources, determination, and a positive attitude, was able to overcome life’s challenges.

Rewind three years to when Chavez was 18 years old. He desperately needed to move away from his home, which was located in a violent neighborhood in Brawley, Calif. He was the victim of bullying and was assaulted at knife point while walking home from high school one day. He knew he could not continue living at home while pursuing his college education. 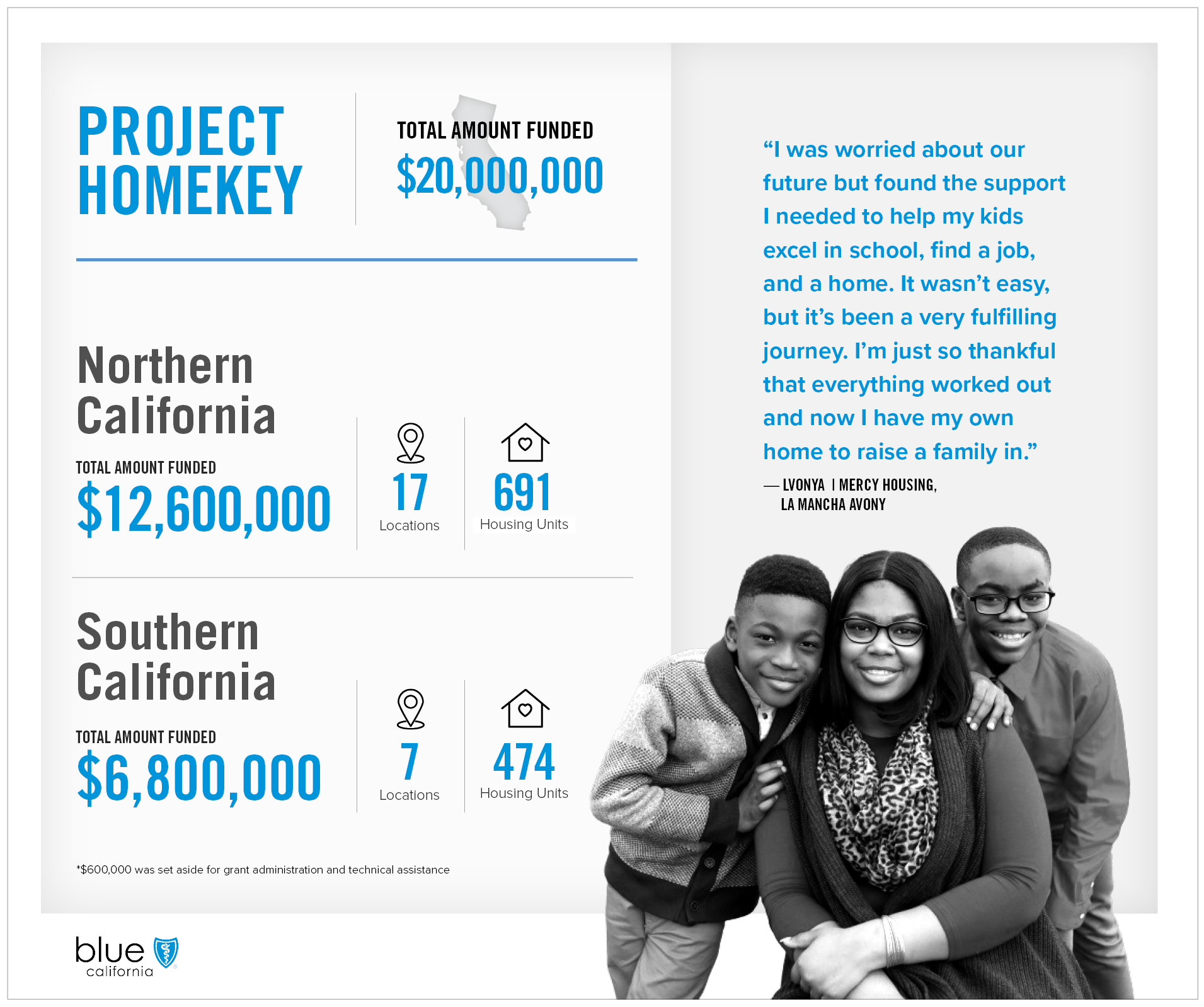 In the summer of 2021, Chavez was accepted into IVC’s nursing program. Through Instagram, he learned about Lotus Living, which provides housing and support to IVC students who face housing insecurity. There, he saw photos from a recent ribbon-cutting ceremony, including shots of his future resident advisor, Jonathan Valenzuela. As he scrolled through photos of units equipped with a bed, mini-kitchen, bathroom, and laundry, Chavez became both hopeful and emotional. Inspired by stories from students who had moved into Lotus Living homes and were commuting to school with ease, he decided to apply. Within weeks, Unit 26 became his new home.

Chavez is now one of 26 IVC students housed in the new Lotus Living Tiny Homes Project, one of 21 projects in California funded through Blue Shield of California’s $20 million dollar contribution to Gov. Gavin Newsom’s Project Homekey initiative. The site provides one year of permanent housing and supportive services, including academic and career counseling, social services, and health care. These supports are essential for college students facing homelessness, who, studies show, are at greater academic risk than their peers because they often need to work to help pay for tuition and living expenses, limiting time to concentrate on studies.

Help from Project Homekey and Lotus Living has made all the difference for Chavez. “On the day I moved in, I was at peace,” he said. “It was a true blessing. I felt like everything was falling into place in my life. I was going to start nursing school, and I had hope for new beginnings. I felt safe, and happy.”

IVC continues to help Chavez navigate bumps along the way. When he started feeling anxious about the rigors of nursing studies, the school was ready to help. Chavez has since met with a counselor and now has a tutor to help him study. Valenzuela, his resident advisor, was also a source of support and encouragement.

“I felt afraid and discouraged, but he advised me to believe in myself, and remind myself that I am capable of accomplishing many great things,” Chavez said. 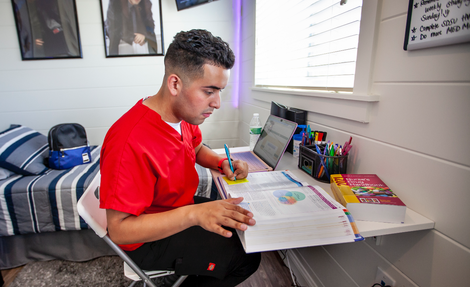 With the fall semester more than half done, Chavez is proud to share that he has maintained a 4.0 grade point average. He credits Lotus Living for helping him manage his stress and providing stability that enables him to focus on the future. Knowing that he has his own space to concentrate on his studies, Chavez feels confident and ready to tackle his education.

“Don’t be pushed around by the fears in your mind, be led by the dreams in your heart,” he said.

With newfound confidence, Chavez has set his sights on a new long-term goal: to become a dermatology nurse practitioner. We look forward to following Chavez in his nursing education and future career in dermatology.

Join Blue Shield of California in supporting IVC college students at Lotus Living by donating to the Imperial Valley College Foundation. The IVC Foundation enhances education of students through fund raising for scholarships and housing.