Don DeVorss Had A Heart Transplant, That Was Just the Start of the Battle

Blue Shield of California employee Julie DeVorss and her husband Don like to joke that he’s a “miracle man.” They’re not exaggerating. After a massive heart attack, two heart surgeries, an extensive lung surgery, a heart transplant, and then treatment for COVID, Don has had an astonishing health journey with the support of Blue Shield. 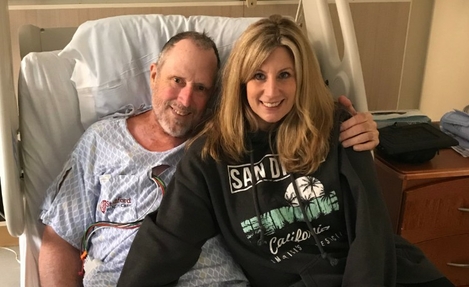 Don and Julie DeVorss after Don's heart transplant surgery. He suffered a massive heart attack, called a 'widow maker' in 2017.

Don is an athletic man of 62 years old with a penchant for the outdoors. Before his health woes, Don and Julie owned a retail plant nursery and landscape construction business near their home in El Dorado Hills. In their spare time, they adventured around the world: ziplining in Alaska, swimming with sharks in Belize, visiting active volcanoes in Nicaragua. Climbing the hills of San Francisco should have been no trouble for Don – but on a weekend jaunt in the city in 2017, life took a sharp left turn.

The couple had been spending the day hanging off trolley cars and taking in the city. Suddenly, halfway up a steep hill, Don sat down and turned gray. He was having trouble breathing. While Don wanted to take a cab back to the hotel, Julie recognized the signs of a heart attack and flew into action.

“Our lives changed forever on that hill,” said Julie. “Don had what the doctors told us is called a ‘widow-maker’ heart attack, because there’s 100 percent artery blockage and only a 6 percent survival rate. We happened to be three minutes from UCSF Medical Center. If we had been hiking or out on the water, Don would be dead.”

Upon arrival at the hospital, Don flatlined twice and was brought back with paddles and removal of the clots in his heart. Over the next year and a half, he struggled to recover, having several surgeries in an attempt to repair his failing heart and lungs.

At this point, Don was getting cardiology care at the Stanford Hospital. After almost two years of fighting for his life, he was in congestive heart failure, had trouble breathing, and only had one option. “I tried to push through, but I just couldn’t,” said Don.

“Stanford put Don on the transplant list and told us it could be anywhere from 30 days to six months,” said Julie. “I thought, ‘Don doesn’t have six months.’”

The following weeks were agonizing as Don’s condition worsened, not knowing when or if he’d receive a donor heart. “One night, I drove to a lake near our house,” Don said. “I grew up there, and it has special meaning for me. I took pictures of the sunset and knew in my heart – no pun intended – that I wasn’t going to last much longer."

That night, Don and Julie DeVorss were having dinner. The phone rang from an unknown number. They didn’t pick up. It rang again. This time they took the call.

“It was Stanford,” Don DeVorss said. “They said, ‘Don, we have a heart for you. Are you interested?’”

It was the lucky break they needed – but the battle wasn’t over yet.

Heart transplant surgery is normally four to six hours, but Don had complications, and his was a harrowing 13 hours. However, it was a success. He spent the next 33 days in the hospital, followed by three months in aftercare, where the couple lived in Stanford temporary housing.

“Those four months were incredibly challenging,” said Julie. “In addition to Don’s health worries, you don’t realize how lonely it is as the caregiver. My refuge was my work in Blue Shield’s Human Resources department. I could not have gotten by without my team’s calls, compassion, and commitment to my family.

“On the insurance side, Blue Shield was there for us just like any other member, and they approved Don’s transplant in a few days. The Stanford transplant doctors said it was record time; usually approval from other insurance companies can take months. Don might have died waiting for approval if we didn’t have Blue Shield.” 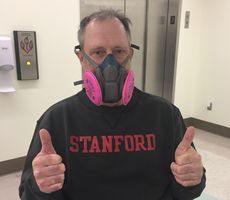 Don DeVorss being discharged from the hospital.

Another fight for life, this time with COVID-19

After Don was released from aftercare and the couple returned home, he had a long recovery ahead of him. It was only after the one-year mark in January 2020, that Don started feeling better. And then coronavirus hit.

“We saw it coming, and I was terrified,” said Julie. “As a transplant patient, Don’s immune system is compromised, and a cold could kill him. He wears a special transplant mask anyway that looks like it’s out of a movie. When the shelter-in-place order came down, Don and I followed it diligently, knowing the risks.”

“I didn’t go out at all except to the grocery store a couple times,” said Don. “And where I live, no one was wearing masks at the time, and I stood out. People avoided me like the plague. Two weeks into the shelter-in-place, I started having what I thought was allergies, but when I began having trouble breathing, I went to the hospital. I tested positive for COVID.

“I was fighting my mind: ‘I am not going on a ventilator! I will not.’ I was down for the count for a week and slept all the time. But I was lucky I didn’t have severe symptoms--and it turns out, it was a really bizarre luck. Because of my transplant, I’m on immunosuppressants to prevent the rejection of my donor heart. Those drugs also combat the cytokine storm that causes many COVID fatalities. So, it’s probably because I had a heart transplant that I didn’t die of COVID.”

A cytokine storm is when the immune system attacks its own cells and tissues rather than just fighting off the coronavirus. In fact, doctors and scientists are looking into those same transplant immunosuppressants to help develop treatment and possibly a vaccine.

Today, Don and Julie are finally able to look toward the future. “I feel very lucky. So many things have gone wrong in the last few years, but so many things went right, which is why Don is still here,” said Julie. “We really squeeze every bit out of life now.”

An inspiration for others 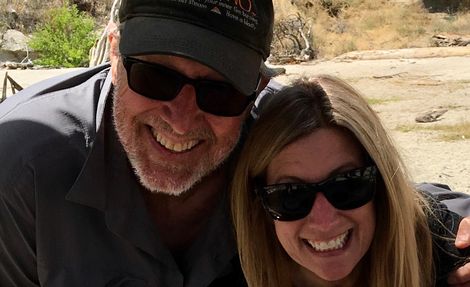 Don and Julie after Don's recovery from COVID-19.

Don is writing his memoir, titled, “The Beast and the Unknown Journey.” The beast is the heart attack. The unknown journey is the miraculous life he’s lived since. Don is filled with gratitude for the people who have helped him along the way. “From the doctors to the donor’s family to Blue Shield, and to all the people who have reached out to make this journey possible – they don’t get thanked enough. I am so grateful to have this gift of being alive, and to live every day to the fullest. You never know what unexpected things can happen in your life.”

Don and Julie give back wherever they can. The couple has worked with other families going through the transplant process as part of Stanford’s Peer2Peer Program. Don also is an ambassador with Sierra Donor Services which is part of the United Network for Organ Sharing. He works in the transplant community to create greater coordination and appreciation between donors, doctors, hospitals, and insurance companies.

If you’d like more information about becoming a donor or ensuring your organs can be donated after death, visit www.donateLIFEcalifornia.org. It’s as simple as registering as a donor at dmv.ca.gov.

Diagnosed With COVID-19, A Blue Shield Member Turned Sickness Into Health for Herself -- and Others