Diagnosed With COVID-19, A Blue Shield Member Turned Sickness Into Health for Herself -- and Others

Her symptoms were textbook coronavirus: fever, chills, headache, shortness of breath, dry cough, fatigue, and loss of taste and smell. 'We want our members to know that we are here for them and that we care about them,' a Blue Shield nurse said. 'They are not alone in their struggles in dealing with the unknown.'
News Center News News Stories
June 23, 2020

Wendy Dougherty had been walking with a colleague to lunch in Redwood City when she started feeling ill. She told herself to shake it off. But by 3 p.m., back at her office, she felt a strong fever. She left work, where she serves as chief operating officer at a nonprofit organization, to rest at home.

When she reached her house in the neighboring town of San Carlos, she found she had a 101.5-degree fever. She made an appointment to see a doctor in town for the next day and went to bed.

Dougherty thought back to two days earlier, when she and her family hosted her brother and his family for brunch at her house. Her sister-in-law had been to Amsterdam, London, and Dublin for business travel in February, and had been feeling better after a stretch of a flu-like illness. The virus had been raging in Italy, and gaining a foothold elsewhere. Many states here at home in the first week of March had reported their first cases. At the Sunday brunch, they all talked about COVID-19, and developing shortages nationwide of food, toilet paper, and disinfectants.

Showing symptoms by Tuesday, Dougherty, 50, took no chances. She self-isolated herself from the rest of her household. “We immediately took every precaution possible, Dougherty said. “I was worried about my family because I did not want to infect them—that was the hardest part.”

Her symptoms were textbook coronavirus: fever, chills, headache, shortness of breath, dry cough, fatigue, and loss of taste and smell. The symptoms would come in waves, and would leave Dougherty with a false sense of security when her condition would temporarily improve. She tried to resume work, only to get hit again with another wave. “My head would just want to fall on the table,” she said. “I couldn’t even look at the computer.” 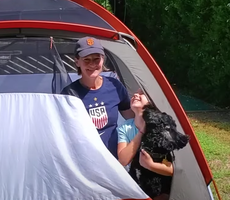 A positive test and the battle to recover

Dougherty was tested at the doctor on Wednesday, and by Friday received the result: positive. Dougherty immediately called her colleagues and family to warn them of possible exposure so they could self-isolate as well. She would also later learn her brother’s family came down with symptoms.

She battled a fever for four days, sleeping 10 hours a night, then napping in the afternoons. Her shortness of breath was most pronounced in days two through five. “It caused anxiety, especially once I knew the diagnosis,” she said.

One big worry was infecting her husband and daughter. Her house has one bathroom, but with two sinks, so she could use her own one. She cleaned any door handles she touched with antibacterial wipes and surfaces in the bathroom, and when she made it to the kitchen. She first tried to pitch in by doing her own dishes for safety reasons, but was urged to rest instead. So she kept mostly to her bedroom, having meals “delivered.” She avoided contact with her husband, and mostly with her daughter, who, tired of air-hugs, once embraced Dougherty in the hallway. “I was nervous,” Dougherty said. “I was scared for her and my husband.”

She had to sleep propped up on pillows, and the coughing made sleep sporadic. Yet luckily, she never got to the point of not getting enough oxygen, so she avoided the hospital. She used an inhaler to help with breathing.

After six days, the worst was over. By day 10, San Mateo County Health, which touched based with her periodically, told her it was safe to go outside the house with a mask. It would take Dougherty a full six weeks to feel completely normal again. (Her husband and 11-year-old daughter never showed symptoms.) 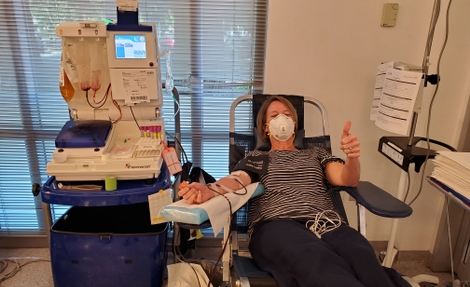 Wendy Dougherty donating plasma after she recovered from COVID-19

Jan Taylor, a registered nurse for Blue Shield of California, also followed up with Dougherty by phone during the recovery phase. “I was glad to share my experience so that perhaps others can benefit from knowing what the experience and recovery process is,” Dougherty said.

Taylor is part of a Blue Shield team reaching out to members who have tested positive for COVID-19. The group of 20 nurses and four social workers provides information and support on all aspects of care, including scheduling of follow-up visits to doctors, and information on benefits and providers. For eligible members, the team will arrange transportation and connect them with a meal-delivery service. Taylor reminds members on her calls to visit Blue Shield of California’s dedicated website for updates regarding the virus.

The team also lends an ear to members, giving them an avenue to air their concerns. In Blue Shield’s outreach, nurses have noted some members have expressed feeling isolated, awkward and ashamed at having contracted this illness. “We want our members to know that we are here for them and that we care about them,” Taylor said. “They are not alone in their struggles in dealing with the unknown.”

From patient to helping others recover

Since her recovery, Dougherty has put her recent struggles with the virus to good use by donating plasma to help sick patients recover. She recently sat for an hour at a Stanford Blood Center site, where her blood was fed into a machine that filtered out plasma, returning her red blood cells to her body. The blood center is working with Stanford Medicine to make plasma available for infusion into critically ill COVID-19 patients, with the hope that antibodies can help save the lives of recipients. Eligible donors must have a positive test for COVID-19 and be symptom free for 14 days.

The Stanford program has shown promising signs early on. Plasma has been used on patients in California, Iowa, Nevada and Hawaii, according to Stanford Blood Center.  Stanford Medicine is working on a clinical trial to determine the effectiveness of the treatment.

Dougherty herself is ready to donate plasma again, if the need arises. “People are coming from far away to donate plasma,” she said. “The more we can tell people about the program; the more recovered patients can help those who are sick.”