After the unforeseen suspension of shipments of Johnson & Johnson’s COVID-19 vaccine in early April following reports of unexpected side effects, thousands of vaccine appointments throughout California were at risk for being canceled. Unless that supply could be replaced, 8,700 appointments for the next 48 hours would have to be cancelled at 55 clinics across the state. 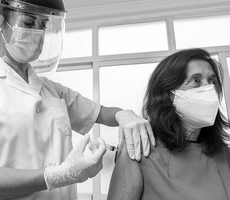 Thanks to accurate and timely data from the state’s My Turn system, sources of Pfizer or Moderna vaccines were quickly identified that could be shifted to fill much of the need. By noon that same day, enough doses had been reallocated to cover 4,000 appointments. By 5 p.m., the state had managed to preserve 70%t of the appointments, including setting up second dose appointments for those Californians. The remaining 30% were promptly rescheduled to other days when supply could be accommodated.

This is the power of having appropriate data in a timely way.

The network was tested again just two days later, when the state opened eligibility to everyone 16 years old or older. My Turn handled 1 million queries that day without any loss in performance. Despite the vaccine supply from the federal government still falling short of demand, seven out of eight eligible people using My Turn were able to find appointments.

Less than three months after California began to streamline its existing vaccine network into an enhanced vaccination provider network managed by the state’s third-party administrator (TPA) Blue Shield of California, the most populous state in the U.S. has made significant progress. California has not only administered more vaccine doses by far than anywhere else in the country – it is one of the most vaccinated places in the world. So far, 31 million doses of COVID-19 vaccines have been administered in California. That’s more than all other nations around the world except for China, India, the United Kingdom and Brazil.

The TPA-supported collaboration among state agencies, county public health officials, thousands of providers, and a myriad of experts and advisors has been instrumental in enabling the state to administer an average of 477,000 vaccine doses daily, the equivalent of vaccinating a city the size of Long Beach, Calif.

As a result, the CDC now reports that California’s seven-day rate of new COVID-19 cases of 40.3 per 100,000 population is far lower than the national average of 135.3 cases and better than every state but Hawaii.

“California is leading the way in vaccinating an enormous population rapidly, equitably and safely,” said Jeff Robertson, senior vice president at Blue Shield of California. “This is the result of hundreds of dedicated people who represent state agencies, local health departments, vaccine providers, the TPA and other stakeholders working together with a common goal of saving more lives by making vaccines more quickly available to all Californians. We are proud to be called on to do our part at Blue Shield of California.”