As COVID-19 Surges In California, Healthcare Workers, ICUs and Providers Struggle to Cope

ICUs are at capacity, there's a shortage healthcare professionals, stress and death are taking a toll on the frontlines of the pandemic
News Center News News Stories
By David Crook
December 18, 2020

Burnout among healthcare workers was a problem before COVID-19 hit. With the nearly year-old pandemic now surging across the country, it’s getting much worse.

Relentless workloads, emotional stress and fear for their own and their families’ health are taking a toll. A study of frontline healthcare workers during the worst of the spring outbreak in New York City found half experiencing acute stress and depressive symptoms. Nurses were especially hard hit.

“The pandemic’s toll on frontline healthcare workers is heartbreaking,” said Dr. Terry Gilliland, executive vice president, Healthcare Quality and Affordability at Blue Shield of California. “We stand in solidarity with those battling COVID-19 on the frontlines and we’re backing up our support with commitments of financing for providers, equipment for communities in need. As we work through the biggest surge we will continue to step up where and when needed.” 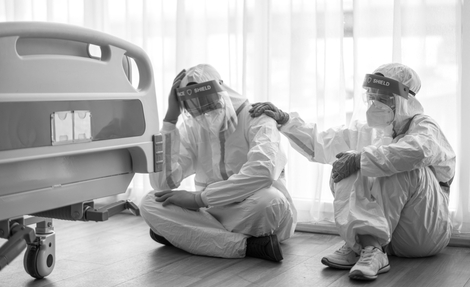 Two-thirds of California doctors, nurses and other health care providers feel emotionally drained, frustrated, overworked and burned out, according to a survey conducted in September by the California Health Care Foundation. Of the 1,200 health care workers questioned, 70 percent of them had hands-on experience caring for COVID patients.

“Health care providers are obviously feeling the strain of working under the extremely challenging conditions created by the pandemic,” says the foundation’s Kristof Stremikis. “It is clear that providers and patients alike are struggling to maintain their mental health.”

The burnout comes in four waves:

First and most obvious is the sheer onslaught of patients. The numbers across California are staggering. As of Dec. 13, the state’s Department of Public Health was reporting more than 30,000 new COVID cases a day.

About 77 percent of the state’s roughly 61,000 hospital beds are occupied--about 15,000 by COVID-19 patients--with the number of available hospital beds dropping quickly. In the first weeks of December, Bay Area hospitals were reporting nearly 1,000 admissions a day, twice the rate of November. Worse still, one-quarter of those patients were in intensive care units, again double the November number.

As bad as those numbers are, they don’t show what’s been going on at individual hospitals. The federal government last week (Dec. 11) released a sweeping database showing a one-week average number of COVID-19 patients in 5,000 hospitals across the country. Nearly 600 hospitals reported being at or above ICU capacity for the week of Nov. 7 to Dec. 3. In California, Cedars-Sinai Medical Center, Los Angeles was at 109 percent of ICU occupancy; UC-San Diego Health Hillcrest Medical Center, 108 percent; Bakersfield Memorial Hospital, 149 percent; UCSF Medical Center, San Francisco, 145 percent; UC-Davis Medical Center, 178 percent.

The tsunami of new patients has put enormous pressure on hospital staffs—and not just doctors and nurses. Technicians, aides, office workers, even security and custodial workers are all working long, hard days and nights.

Case in point: Someone with a severe case of COVID-19 will be on a ventilator, which must be monitored by a respiratory therapist. Their kidneys may shut down, and the patient may require dialysis—requiring the attention of another specialist. Every day, they’ll need six or seven people to flip them onto their stomach, and then later onto their back again, all while the staff is handling several tubes administering the patient sedatives, pain medications, blood thinners, antibiotics and more. All of these different procedures must be overseen and monitored by an ICU nurse.

Some hospitals are assigning four or more patients to each ICU nurse, when it’s usually just one or two.

Hospitals in at least 25 states, including California, are critically short of doctors, nurses and other staff, according to the American Hospital Association. Nurses at UC Irvine Medical Center staged a rally in November protesting “short staffing, lack of equipment and emergency department crowding,” according to their union.

California has put out the call for hundreds more nurses and other health care workers to join the California Health Corps, an effort to enlist professionals to supplement exhausted local and regional medical teams. The state needs to hire 3,000 temporary medical workers. California has 300 of those currently working along with 186 medical staff members deployed from the California National Guard and the California Medical Assistance.

So much sickness and death

Most COVID-19 patients requiring hospitalization are very sick. The average hospital stay for COVID-19 patients is three weeks—four times longer than the average stay of other patients. And, of course, many COVID-19 patients are dying. Hospital workers are seeing far more suffering and deaths than even the most hardened professionals are accustomed to.

"The nurses and care providers working today are living more loss and trauma in a week or month than they may have seen in their entire career,” says April Hansen, a nurse herself and executive vice president of Aya Healthcare, a medical staffing company headquartered in San Diego.

“I have cried more tears this year than I have my entire nursing career,” Tamara Hinckley, an ICU nurse in Santa Rosa, told the San Francisco Chronicle.

It was a horrible sight: Judy Bounthong, a 58-year-old surgical tech, lay dead on a motel bed in West Covina. She’d checked in more than two weeks before, isolating for two weeks because she had been exposed to COVID-19 at her work. When she didn’t check out as planned on Oct. 13, the manager went into the room and found her body lying on the bed.

The Guardian, the Britain-based news organization, maintains a database of U.S. health care worker deaths. As of Monday, the count was 1,463, including 21 in California.

But it’s not just illness and death stalking the healthcare workers. Even those far from the frontlines of the COVID-19 fight are experiencing personal difficulties. Elective surgery and other non-urgent medical procedures have been curtailed

That California Health Care Foundation survey found that patient volume is down for nearly half of healthcare providers: 82 percent of pediatricians and 84 percent of emergency departments reported a drop in patients. More than one in three of those surveyed said their office, clinic, hospital or medical facility was experiencing financial instability.

One surprising casualty: The San Diego head-and-neck surgery practice of Ted Mazer, the former president of the California Medical Association and a long-time advocate for doctors and the medical profession. As 2020 dawned, Dr. Mazer, 62, was already becoming disillusioned with the business of practicing medicine and was planning retirement.

Then COVID-19 hit. His practice fell off 75 percent to 80 percent, though his patient load picked back up in the summer. But the business-side hassles of the practice were weighing on Dr. Mazer. His long-time business manager was leaving. The husband of another staffer contracted the virus and died. It was time to close.

Was Dr. Mazer burned out? “Yes,” he answered. “I am embarrassed to admit it, but I can’t deny it.”

Why Your Doctor Is Stressed and Burned Out

Are You Burned Out on the Job?