What do these states’ healthcare outcomes have in common? Healthcare information exchanges that aggregate and share health records to give a comprehensive picture of patients’ treatment history to providers, allowing for more informed, coordinated care in real-time.

Around the country, states and healthcare systems have invested money in creating large-scale information exchanges to improve quality of care and drive down burgeoning costs. Academic studies show that the data networks are contributing to significant improvements in patient care through giving providers access to clinical data critical for treating patients in the hospital, an emergency room, in an ambulatory facility, or (hopefully) at home before they require more extensive care.

California is now making significant strides toward having its own statewide healthcare information exchange. To date, more than half of the state’s 343 hospitals are already participating in some type of an information network. And early next year, $50 million in state and federal money will be used to fund further participation in non-profit health exchanges. 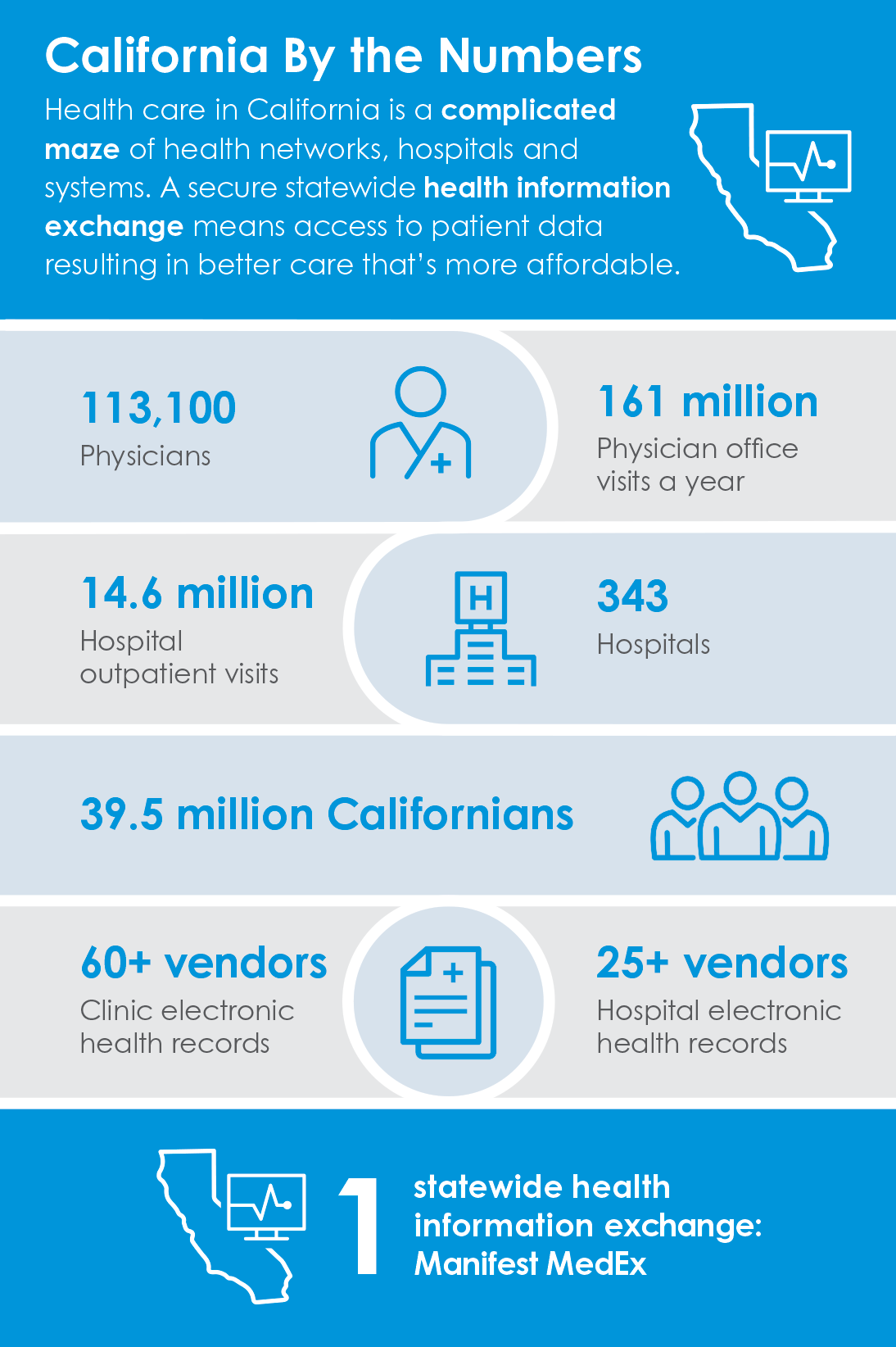 Providers, payers, and employers “are all trying to move the dial on quality and cost,” said Williams, who was the senior advisor for Health Innovation and Technology under President Obama prior to joining Manifest. “They recognize that their own future success depends on building this common infrastructure.”

Networks like Manifest seek to help providers deliver improved care by giving them important insights about their patients across the continuum from prescriptions and diagnostic tests to therapeutic treatment. For example, primary care doctors using Manifest are notified when their patients are discharged from a hospital. Patient medications also are tracked which can be used to reduce potential overprescribing and inadvertent drug interactions. Providers can access a patient’s medical record online at the moment the person is receiving care -- in an emergency room or physician’s office, for example – ensuring the most accurate and up-to-date clinical information. In the Inland Empire Foundation, a study showed that Manifest’s information helped providers reduce hospital readmissions by as much 75 percent.

The idea of an electronic health record, or EHR, first received national attention in 2004 when President George W. Bush called for every American to have an EHR within a decade. Five years later in 2009, under President Obama, the HITECH Act (Health Information Technology for Economic and Clinical Health Act) provided money to states and healthcare systems to invest in the infrastructure to create online data networks. States and local communities responded, developing many different models.

In Maryland, for example, the statewide healthcare exchange started small at the impetus of a businessman, John Erickson, who founded retirement communities. Erickson was frustrated by how clinical records were shared between his assisted living facilities and the hospitals where his residents were treated, said David Horrocks, who oversaw IT for the retirement communities and now runs Maryland’s information exchange. Incomplete paper records would move between the facilities and the hospitals, leaving room for errors if the correct clinical document didn’t show up.

To find a solution, Erickson brought together leaders from John Hopkins Health System, University of Maryland’s medical system and MedStar Health to find an efficient way to exchange patients’ clinical information between providers and the residential facilities. The collaboration eventually led to the statewide information system called CRISP, or Chesapeake Regional Information System for our Patients. Horrocks said Maryland grew one region at a time, connecting hospitals and capturing lab reports and patient discharge summaries.

The value of health exchange networks is measured by reduced costs and improved care. But its use is measured, in part, by the number of queries by healthcare providers and the number of alerts sent to providers. The queries show that providers are accessing a patient’s history of clinical care to allow for more informed diagnosis and treatment. The notifications help facilitate follow up care when a patient is discharged from the hospital or an emergency room visit.

For example, in Maryland, primary care physicians for roughly 75 percent of all Medicare patients receive an alert upon a patient’s discharge, facilitating a follow up appointment. The alerts are considered a key factor in helping reduce Maryland hospital readmissions by six percent, healthcare leaders estimate. At the same time, CRISP receives an average of 90,000 queries a week by physicians.

Importantly, in addition to improving patient’s clinical care, healthcare information exchanges are providing critical public health intelligence. Shaun Alfreds, who leads Maine’s statewide exchange, said, the exchanges enable states to identify and address public health issue such as opioid abuse and diabetes. The exchanges “provide a real-time dashboard,” to see where the epidemics are occurring and in what population, he said.

As Apple and Amazon’s own recent market offerings show, a number of players see an opportunity to leverage data and technology in the $3.2 trillion healthcare sector. California first took a stab at creating a health information exchange back in the late 1990s in Santa Barbara, modeling the project partly on the peer-to-peer song sharing service Napster.

Manifest’s Williams is confident California can lead the nation in ensuring that every resident has a complete digital health record available to the entire healthcare care team. The state has the opportunity to “leap into the future if we can get everyone on board,” she said.