Editor's note: An earlier version of this report misstated the amount of money California is committing to health information exchanges and databases. It has been corrected.

The 2018-19 California budget, signed by Gov. Jerry Brown last week provides $60 million to create an all-payers and claims database. In addition, the state is pledging $5 million in hopes of receiving an additional $45 million in federal matching funds for connecting providers to health information exchanges.

The funding comes at a time when momentum to support the state’s HIEs— data sharing systems allowing health care providers and patients to securely access and share electronic medical information—continues to build. Providers that connect to HIEs can make more informed decisions about a patient’s care, deliver it efficiently, thereby reducing the overall costs of care.

In March, Blue Shield of California announced it would encourage providers to participate in Manifest MedEx (MX), the state’s largest nonprofit HIE. This week, MX announced three major provider systems have joined the MX network, including Heritage California and Hill Physicians – two of the largest medical groups in the state – and Stanford Health Care. They will be adding about 1.5 million patients to MX’s more than 11 million patient claims records and 5 million patient clinical records currently accessible through MX. 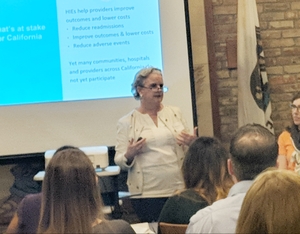 “The fact is HIE is working now and we need to accelerate adoption,” said Claudia Williams, CEO of MX. “We have the technology, and now is the time to invest in the HIEs that are getting it done.”

HIEs are designed to aggregate patients’ records across various health provider touchpoints, allowing them to share it with an entire care team in real-time. While providers have had access to electronic health records for years, the way information is currently shared is often inefficient and incomplete. With a complete picture of a patient health record, providers can avoid unnecessary tests, get detailed medication histories, and better deliver coordinated care.

An estimated 184 hospitals statewide participate in California’s HIE initiatives. But approximately 164 hospitals do not. “When you look at the state of California, there’s great connectivity in pockets,” said Williams. “With this funding, we’re looking to fill the white space and get the rest motivated and connected to HIE.”

Williams noted a primary area where HIEs are already making an impact—reduction in readmissions. The Inland Empire Foundation for Medical Care ACO, which is part of the MX network has helped providers reduce readmissions by as much as 75 percent. Providers receive a real-time alert the minute patients leave the hospital so they can follow-up, reducing the need for unnecessary emergency room readmissions. Maryland has also achieved more than 6 percent reduction in readmissions statewide by connecting all their hospitals to CRISP, the state’s HIE, to deliver real-time notifications.

A crucial aspect of the $50 million funding will allow HIEs to connect to the CURES database, the California State Department of Justice Prescription Drug Monitoring Program that allows providers to monitor and track a patient’s opioid use. In October, providers will be mandated to check CURES before prescribing controlled substances, a potentially time-consuming and onerous process that HIE connectivity can help streamline.

Blue Shield was part of a coalition led by the California Medical Association and joined by several other health care organizations to request the state budget allocation to onboard providers to HIEs. Now that the funding is available, efforts in the next 18 months will be focused on getting HIE working for as many providers as possible.

“We want to see that this funding is rolled out quickly and out in the community where it can be used," said Williams.