'We'll Do Anything,' How Blue Shield Cared For a Crash Victim A Continent Away

Karen Snedeker credits her husband, her faith and her health plan for a remarkable recovery from a devastating accident in Brazil
News Center News News Stories
By Kathryn Kranhold
November 05, 2018

When Karen Snedeker is asked about the August automobile accident in Brazil that crushed her lower body, the Santa Cruz math teacher gives a numerical account, or what she calls, “by the numbers.”

The list simplifies the life-threatening accident that has upended Snedeker’s life for more than two months. Her story of survival and step-by-step recovery is far from simple. 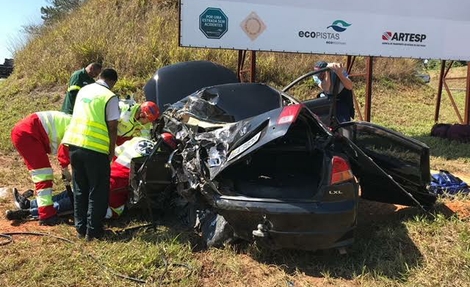 It starts with her family’s missionary trip to a seminary and youth camp in Sao Paulo at the end of July. Karen Snedeker and husband, Edward, with their 21-year-old son and 17-year-old daughter, and members of their church, Felton Presbyterian, have helped build the camp in the suburbs of the country’s largest city over many years (Edward Snedeker is Felton’s pastor).

With their camp visit coming to a close, the Snedekers and their 17-year-old daughter, Brooke, with the camp’s director, decided to take a trip to Ubatuba, a southern beach town on the Atlantic. At one point, they missed an exit and pulled over to the side of the highway to look at a Google map.

What happened next remains a little fuzzy. A large truck, on the highway behind them, veered off the road and rolled over their four-door Honda Accord. The car was nearly flattened.

Snedeker and his daughter crawled out of the crumpled car’s passenger side windows, with no injuries. But Karen Snedeker and Botelho were trapped in the smashed metal.

Within minutes, emergency medical responders and firefighters surrounded the wreckage, cutting through to rescue them. Botelho had three broken ribs, and a cut on his forehead. Snedeker, however, was unable to move and was barely breathing.

The ambulance rushed Snedeker to a hospital intensive-care unit in Sao Jose dos Campos, not far from the accident. Her pelvis was shattered, the top of her femur was fractured, and her hip socket was dislocated. Over the next 24 hours, physicians addressed Snedeker’s immediate medical issues, including putting back the dislocated hip socket and placing her left leg in traction. 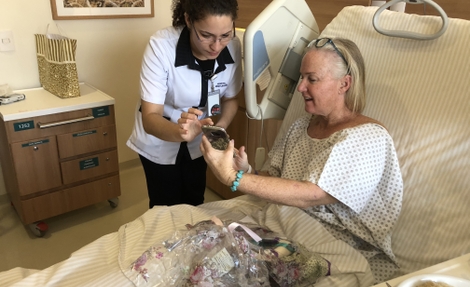 Snedeker learned to cope being in a hospital in a foreign country where she didn't speak the language. Here she speaks to a nurse.

In need of more serious treatment, Snedeker was transported by ambulance for two hours to Hospital Sirio Libanes in Sao Paulo. There, Snedeker began to grasp the magnitude of her injuries while she and her husband learned to navigate a foreign healthcare system where they could not fully communicate with the mostly Portuguese-speaking physicians and nurses. She relied heavily on Google translate to talk with the hospital staff, while her Brazilian friends whom ran the seminary advised them on certain medical decisions.

In reflecting on that moment, she said, “This was the worst place for me. I’m in a Portuguese speaking hospital without my kids and support group. However, it was the best place because of my husband and my friends and my faith.”

“How could life be at its worst and best at the same moment,” Snedeker said.

As the days wore on, the questions were many and mounting. Most immediate: When could she return home to receive treatment from her medical providers at Palo Alto Medical Foundation? How would they pay for the medical treatment and care at the two Brazilian hospitals?

Edward Snedeker reached out to Blue Shield of California’s international affiliate, GeoBlue, and learned that their TRIO HMO insurance plan covered emergency hospital stays outside California. In what he described as seamless coordination between GeoBlue and the hospitals, Snedeker said, he was also happily surprised to learn that the highly-ranked Sirio Libanes was part of the foreign hospital network.

That was the painless part.

Before being cleared to travel the 29-hour flight home, Karen Snedeker had to be strong enough to move her body into a wheel chair while standing on her right leg, which had only half of its weight bearing capacity. She had to sit in the wheel chair for two hours, simulating the stretch of time that she would be waiting at the Sao Paulo airport and during the Dallas layover to San Francisco.

A determined Snedeker, clinging to a walker, practiced standing on the right leg, five times a day, calling her exercise, “the flamingo.” Her husband wheeled her around the hospital for hours at a time. “I was so far way in pain, broken,” she said. “My husband was right there the whole time. My faith kept me going.”

Now nearly two weeks into her recovery, Snedeker received word that she could begin researching her trip home. But the logistics were daunting. She had to book ambulances to and from the airports and find flights with flatbed seats (it was imperative that she flew horizontal because she could not sit for more than two hours without risking more damage to her pelvis).

Family and friends answered one of Snedeker’s calls for help: they contributed airline miles to purchase two tickets on American Airlines for first class, which had seats that reclined. 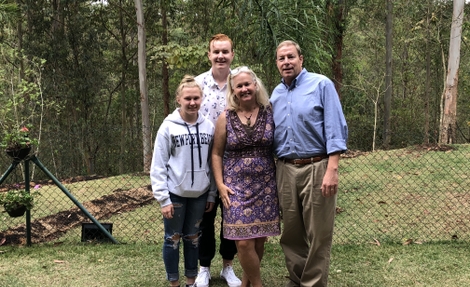 Snedeker credits family and faith for her successful trip home and recovery.

The other call was answered on Aug. 29, Snedeker’s 51st birthday. Snedeker had reached out to Blue Shield to get help with her return home and was eventually connected with a member of the TRIO plan’s concierge team.  (The TRIO HMO plan includes a concierge service that coordinates care among a member’s physicians, hospitals and other healthcare providers.)

Snedeker painstakingly explained her medical condition and her travel requirements to Blue Shield social worker Tiffany Lighter. Also on the call was Lighter’s colleague, Mercedes Munoz, a registered nurse who drilled down on Snedeker’s medical condition.

As they were working through the details, Snedeker’s mobile phone went dead. She did not know how to reach Lighter or Munoz. “That’s when I felt the most despair,” she said. “That was one of the hardest moments.”

Snedeker plugged in her mobile telephone to recharge it, and moments later, it rang. Lighter was on the other end, calling from the concierge office in the Sacramento area. “I knew at that moment, I was going to be OK,” Snedeker said.

With the three-day Labor Day weekend closing in, Munoz and Lighter were pushing to get timely approvals for an ambulance and medical treatment that were outside of Snedeker’s insurance plan coverage. They had less than 48 hours. They affectionately nicknamed Snedeker “Brazil.”

On Friday, Aug. 31, Snedeker and her husband boarded the plane, and landed 29 hours later in San Francisco. “We wanted to greet her at the airport with sign,” Blue Shield’s Lighter said.

Munoz added: “We’ll do anything to make sure our members are safe and cared for.”

Snedeker spent the three-day weekend at Stanford Hospital for assessment before driving the windy road to Santa Cruz on Sept. 4 to begin home care, including physical and occupational therapy.

Like learning “the flamingo” in the Sao Paulo hospital, Snedeker has learned how to manage simple maneuvers from rolling over in bed to stepping down stairs into her laundry room without falling and opening the oven door without burning her arm. Snedeker returned to the classroom Oct. 26.

When asked, she adds to her list: “Three miracles.