'Each person deals with their cancer differently, and I let them decide how they want to respond'
News Center News News Stories
By Emily Otani
October 29, 2018

Mercedes Munoz was 8 years old when she discovered her calling. While accompanying her mother to the hospital to visit her grandfather, she remembered thinking, “this is where I belong.” It was her first inkling that she might become a nurse. After all, her mother was one.

She eventually found her way into the hospital as an intensive care unit nurse, practicing for 19 years.

But her life ended up resembling her mother’s in a way she didn’t anticipate. In March 2014, she was diagnosed with breast cancer, the same disease that afflicted her mother.

“I got a cold that didn’t go away,” said Munoz, describing what prompted a doctor’s visit. Her doctor reminded her she was due for a mammogram, and Munoz, feeling unwell and ready to put off testing for another time, hesitated. Her doctor became insistent because of her family history. “I wasn’t in the mood to do it, but I did it to appease my doctor,” she said. “It ended up saving my life.”

Three years of intense treatments followed: chemotherapy; a double mastectomy; a hysterectomy; and multiple complications. Slowly, she recovered from treatments. She is now in remission.

Her battle with cancer was long and tough but she was eager to get back to work. Having already practiced in the high-stress intensive care unit environment, and her roots still firmly planted in the Bay Area where she grew up, she was ready to parlay her nursing expertise in a different way as part of Blue Shield of California’s Rancho Cordova-based Concierge team as a lead nurse case manager.

Munoz took the lessons of her experience to other cancer victims

Shield Concierge is a team comprised of registered nurses like Munoz, health coaches, clinical support coordinators and pharmacists who are available by phone to field a myriad of questions. Members call in with questions about health plan coverage, the treatments they’re receiving, and how to better cope with their injuries and diseases. “We do everything we can to make their lives easier,” said Munoz. “We’re there for members to be their advocates.”

Interactions with members primarily take place over the phone, but Partners in Care, a home care agency that partners with Blue Shield often serves as the “eyes and ears,” of the concierge service said Munoz. She told the story of one member who returned home after hip surgery and expressed difficulty getting around his house. At first, she thought he was having trouble with crutches. But after a visit from Partners in Care at the member’s home, they saw he was a hoarder and pitched in to improve his living conditions and arrange for regular nursing care. 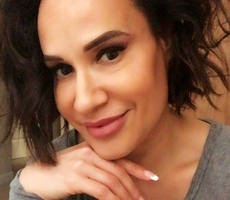 Munoz’s clinical know-how helps Blue Shield members a number of ways. But her personal experience makes her a particularly effective advocate for cancer patients, and because her Concierge colleagues know her story, she has become the go-to case manager for members with breast cancer. She counsels them on what to expect after their surgeries, how to manage pain, and allays their fears. “I can have compassion with my members, and understand what they’re going through. I can be there for them not only as a nurse but as someone who has been through the same thing,” said Munoz.

“Each person deals with their cancer differently, and I let them decide how they want to respond,” said Munoz, reminding members that there’s no guidebook or road map for cancer survival. For instance, not everyone would deal with chemotherapy the way she did. Hair loss, often a side effect of the treatment, left her completely bald. Some would opt for a wig, but it just wasn’t for her. “Hair is highly overrated,” she said laughingly, and noted one great side benefit of baldness. “I got ready a lot faster.”

While she recognizes that responses to cancer vary in each person, she also hears about common challenges, especially one she felt keenly.

“What’s so common is that you want to be strong for your family and friends. You don’t want to tell them how you truly feel,” said Munoz. “You don’t want them to worry about you.” Expressing feelings without the need to filter is an important part of the journey, and Munoz will refer members to support groups to provide them with an outlet to express their struggles.

Giving back the sort of support she received

While she said it’s in her nature to remain optimistic, she had low moments and had to lean on her support network, especially her mother. “We’ve always been close, but she was my rock,” said Munoz. She recalled when after a surgery and in pain, her mother walked with her up and down a hospital hall. It was Mother’s Day and her mother posted on Facebook that the last time she was walking with her daughter in a hospital hall was when she was born, saying “she’ll always be my baby.”

Another source of support was her boyfriend, Brian Hankins. He remained by her side throughout her illness. “He was with me during my whole cancer journey. He’s an amazing guy. I told him to run for his life, but he didn’t do it.”

Hankins and Munoz were married this year on Valentine’s Day.

She recently received a clean bill of health from her doctor and decided not to preoccupy herself with whether the cancer will return. “Is it going to come back? I don’t worry about it,” said Munoz. “I do what I have to, because worrying is no way to live.”

This life lesson has helped her be a better advocate and case manager for members, knowing she can continue to be of service.

“I can put my all into the member, helping the other nurses, and learning from them too,” said Munoz. “I love my job.”

'We'll Do Anything,' How Blue Shield Cared For a Crash Victim A Continent Away

Tennis Pro Bounces Back with Help from Blue Shield of California