Peter Long, head of the Blue Shield of California Foundation, wants the state to have one of the lowest domestic violence rates nationally in 10 years
News Center News News Stories
October 25, 2018

Peter Long, president and CEO of the foundation, explains why the organization is funding efforts to eradicate and understand domestic violence and its impact on the health and wellbeing of Californians.

The foundation has made domestic violence a priority in grantmaking. It’s even part of the mission statement. What are the origins of committing to this issue?

Ending domestic violence has been a priority since the Foundation was dramatically expanded to its current size and scope in 2002. The focus came from the deep commitment of Blue Shield of California’s leadership to ensure that all Californians experience good health and safety. It was, and continues to be, a courageous decision to address a highly complex and stigmatized social issue that people describe as “personal” or a “private” even though it affects every part of our society. It’s estimated that one in three women and one in four men experience some form of domestic violence in their lifetimes.

Explain why the foundation sees this as a health issue beyond the obvious threat to domestic violence victims.

If we look at the world through the lens of domestic violence, we can see that it impacts the health of, not just individuals, but also families, communities and future generations.  Domestic violence takes many forms—physical, emotional, financial, psychological and others—and its impacts include a wide range of acute and chronic physical and mental health conditions, like a weakened immune system, cardiovascular disease, chronic pain, gastrointestinal disorders, anxiety, depression, and post-traumatic stress disorder, among others. 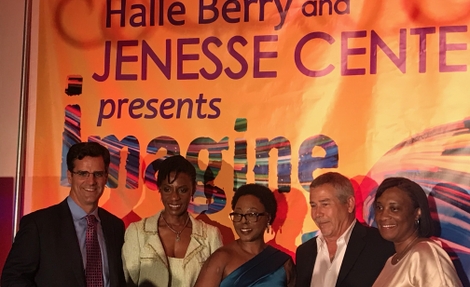 Peter Long (left) accepts an award from the staff and supporters of the Janesse Center in Los Angeles. The center is devoted to prevention of domestic violence and support of its victims.

Through a study that we supported, we learned that 88 percent of Californians believe that domestic violence is an important issue in our society and 95 percent would help a friend who is being abused, but the vast majority are unsure of how to stop domestic violence. That is where the Foundation can step in to facilitate broader-scale changes.

What are some of the biggest wins the foundation has had in supporting work around eliminating domestic violence?

We have been very successful in our work to strengthen domestic violence service providers, as leaders, as a network, and as organizations. Through these efforts, the state’s domestic violence field has become stronger and more connected—and is now in a better position to advocate for policy change, share learnings and collaborate, which has led to increased cultural responsiveness and resources for underserved communities throughout the state. Just this year, advocates were able to get an additional $20 million from the state for enhanced domestic and sexual assault services.

We’ve forged partnerships between providers of health care and domestic violence and sexual assault services, creating a more effective and thoughtful system of care. We’ve also brought the issue of prevention forward, because it is not enough to prevent the recurrence of violence, when we can help prevent it before it happens.

What kind of an impact would you like the foundation to make in this area five- to 10-years down the road?

We’re very focused on working with communities to change systems so they can truly support people’s needs. To end domestic violence, we need better data, new research, access to best practices and a fuller understanding of its complex origins. We’re supporting efforts to remove the barriers in domestic violence systems that limit services to people in crisis; and we’re strengthening and helping to develop systems and initiatives that prevent violence from occurring in the lives of both children and adults. We have a great track record, outstanding partnerships in the domestic violence field, a bold strategy and an unwavering commitment to make sure that California has the lowest rates of domestic violence nationwide within the next 10 years.