Editor's note: since this story first appeared Oct. 26, the company producing smart inhalers has restructured. SmartAirLA is moving forward with the project. The story has been updated to reflect the change.

Take a deep breath. Really deep. Way down into the bottom of your lungs. Feel it.

Now think. Seven million kids in the U.S. can’t do that so well. They have asthma, a chronic lung disease that inflames the body’s air passages and makes breathing difficult. It kills 11 Americans every day.

Los Angeleno Ray Cheung has a plan to help them--”smart” asthma inhalers that will help children better manage their disease while greatly reducing the cost of asthma healthcare and pinpointing air quality issues contributing to the problem. 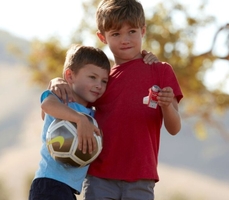 The causes of asthma are thought to be both genetic and environmental, and one major culprit is air pollution. L.A. has plenty of that, along with nearly 60,000 underserved, asthmatic children who struggle to take a deep breath every day of their lives.

Cheung is the founder and executive director of SmartAirLA, a year-old effort to help asthmatic children take control of their conditions. His organization has just received a $250,000 grant from the Blue Shield of California Foundation to launch a pilot smart inhaler program in Los Angeles with the support of the Los Angeles County Department of Public Health.

“Our vision is if you are an underserved child and live in a high-asthmatic area and have to endure high rates of pollution, you should be given one of these inhalers,” says Cheung. “We want to equip these communities with the tools so the kids can control their asthma.”

That’s a lot for a hand-held gizmo no bigger than a candy bar.

You are probably familiar with traditional asthma inhalers, small L-shaped pumps that patients use to force medicine down their airways and into their lungs. Most asthma sufferers use two different inhalers because they pump two types of medicines—long-term control medicines that help reduce airway inflammation and prevent asthma symptoms and quick-relief, or "rescue," medicines that quickly relieve asthma symptoms that may flare up.

For the initial trial, Cheung’s group will partner with community health clinics to distribute Bluetooth-enabled inhalers to 150 children with asthma. These smart inhalers remind asthma patients when to take their daily medicine and download usage data to the patient’s smart-phone so a doctor can monitor the medication regimen.

“This project will not only put the ‘internet of things’ in the hands of the people who need it most, underserved children,” said Peter Long, Ph.D., president and chief executive officer of the Foundation, “It will create a powerful new dataset that their communities can use to advocate for a healthier environment.”

SmartAirLA is focusing on economically disadvantaged areas that also have poor air quality. For the initial rollout, they’ve pinpointed three L.A. County regions—South L.A., Boyle Heights/East L.A. and the Long Beach-Wilmington-San Pedro area. Problems in the last region are especially serious, Cheung says, because of the area’s refining operations and the heavy freight traffic going to and from the port area.

Says Cheung: “Our mission is that, one, we can reduce asthma attacks by getting poor kids the inhalers and, second, getting that data and creating what we call an ’asthma heat map’ so we can pinpoint where asthma attacks are happening, where and what is causing them.”

The forerunner of SmartAirLA is the AIR Louisville program. The air around Kentucky’s largest city is among the most polluted in the country. Beginning in 2012, the city and local supporters gave 300 asthma sufferers smart inhalers. Expanding the program three years later, the government worked with a coalition of health and philanthropic organizations to decrease asthma rescue inhaler use by 82% in 1,100 patients.

Sensors collected 1.2 million data points, including over 251,000 medication puffs. AIR Louisville researchers combined the data with over 5.4 million environmental data points to help learn what causes asthma symptoms in the city. The coalition then used the date from the inhalers to plant greenbelts and reroute freight traffic, reducing pollution by 60% in asthmatic hotspots. The city even instituted a daily “asthma forecast” to alert citizens to potentially dangerous air quality.

SmartAirLA and the Foundation are hoping for just those kinds of results. The grant was one of 16 “Value of Prevention” grants that the Foundation made for 2018. Falling under the Foundation’s “Designing the Future of Health” initiative, the funded programs focus on creating healthier communities by exploring the value of prevention and society’s collective ability to bring resources, funding, knowledge, technology, and shared values together.

“Intellectually, we all agree that intervening earlier saves money and saves lives,” says Rachel Wick, senior program officer with the Foundation. “Prevention is often underfunded, or it’s the first thing to be cut when times get tough. We want to see how we can get unstuck from that big problem.”