“Blue Shield Promise found me, they found me!” is how Jorge Bautista, 53, describes his renewed start on a path to improved physical and mental health with Blue Shield of California Promise Health Plan and its range of services for Medi-Cal members. 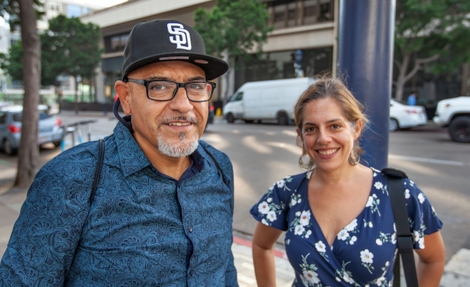 Bautista has had lifelong health problems and repeated surgeries with his legs and has lived on and off the street for many years.  He lost his recent job, which required heavy lifting of metals, because of his health complications. He had no family members who could take him in, became a random victim of violence, and wound up homeless again. Not long after that, he was hospitalized with serious wounds on his feet and was then moved to Magnolia Post-Acute Center, a skilled nursing facility in El Cajon.

That’s when Lisa Minond, senior social worker in Blue Shield Promise’s Social Services team who is assigned to nursing homes and hospitals, came into Bautista’s life.  He recalls the first time he spoke with her on the phone.  “I couldn’t believe that a health plan would actually send someone to help me start moving into a better kind of life. I started to cry,” he said. “It was nothing like the health plan I used to have – nobody ever called me when I fell on hard times and was hospitalized to help me and connect me to services I needed.”

Things at Blue Shield Promise worked to Bautista’s advantage.  “As part of our regular operations, we’re notified when a Medi-Cal member is homeless and in a hospital, since we are the payers.  I was assigned to Jorge at Magnolia, and that’s when our work together began,” said Minond.

Minond was able to work with Magnolia to advocate for Bautista’s extended stay there once his skilled nursing needs ended.  “Fortunately, the nursing home agreed to keep him under Long-Term Care (LTC) authorization because they were compassionate about his homeless situation and his desire to improve his life.  Most important, Blue Shield Promise authorized continued LTC payments for custodial care because of his homelessness,” Minond explained.

“Jorge is one of the most motivated people I have ever worked with,” said Minond. “He sincerely wants to succeed, is so self-sufficient, and follows up on everything we have advised him to do.”   As one example of Bautista’s zeal, Minond describes how he waited in line for three hours to be interviewed so he could qualify for General Benefits (cash aid) at one social services agency she directed him to.  Also, unknown to Minond until after the fact, Bautista traveled several miles on his own to go to a medical appointment, before she reminded him that he was eligible through Blue Shield Promise for free transportation to and from any medical or mental health appointments.  “That’s great to know!” he said.

Bautista now lives at a residential community for homeless people in San Diego called PATH, which stands for People Assisting the Homeless, thanks to Minond’s intervention.  Blue Shield Promise has a long-standing contract with PATH’s Recuperative Care Unit and Minond capitalized on this relationship. This became a turning point for Bautista. He uses many of its on-site medical, mental health, and diverse supportive services, and is proud of how far he has come in the two months since he met Minond.

“So many good things have happened for me,” said Bautista, who is a legal U.S. resident.  “I’m now applying for American citizenship and am working to get stable housing soon with help from PATH. I have CalFresh, a cell phone, and am waiting to hear about my Supplemental Security Income from Social Security.”   Best of all, he adds, he has reconnected with a brother he hasn’t seen for more than a year.

He especially enjoys living in downtown San Diego. “I can hear the cheers outside of Petco Park from the baseball game and that makes me happy,” he said.

Right now, Bautista’s life is on the upswing, and both he and Minond are elated.