Ketanji Brown Jackson broke a glass ceiling this week, becoming the first Black woman confirmed to serve as a justice on the United States Supreme Court. 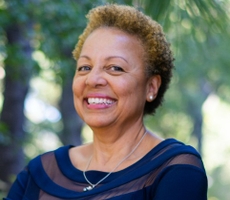 During her confirmation hearings, Jackson talked about the importance of trailblazers – those who build on the legacies of leaders who have come before them, as well as their role in inspiring future leaders. She said, “It is not necessarily easy to be the first, but it's an opportunity to show people what is possible.”

As the first Black woman general counsel of Blue Shield of California, the words of Jackson during her hearing ring true for me today. When you see someone like yourself succeed, it makes you feel like anything is possible.

I spent my earliest years traveling the world with my Air Force family before settling in South Jersey, not far from Philadelphia. I was the baby, with my eldest brother being nineteen years older than me.  While both of my brothers and dad were off fighting in Vietnam, and with my sisters already in school, my mom fostered my innate sense of curiosity and instilled in me her own love of learning.

By eighth grade, I knew I wanted to go to law school, having been influenced by my dad’s journey to earning his law degree from Temple University, at night, while raising a family, and working full time. So, I went for it, and after graduation from Bryn Mawr College, I received my law degree from Boston University School of Law joining a well-known, established Philadelphia law firm.

Thanks to trailblazers like my parents and siblings, as well as the giants of the civil rights movement who sacrificed so much, I’ve been inspired, emboldened, and empowered to achieve many firsts throughout my own life, just like Jackson, including becoming Blue Shield’s first Black chief privacy officer, first Black/woman chief risk & compliance officer, and first Black woman vice president. When I was promoted to VP, the only Black VPs had been men.

If Jackson’s past is a prologue to her future, we can expect her to continue to be a trailblazer -- a staunch advocate of equal justice and equal protection under the law, especially for the most vulnerable among us, regardless of race, gender, or socioeconomic status. In this way, Jackson will be a role model for all of us at Blue Shield of California.

We should all hold our heads high and celebrate this historic moment.