In the News: Blue Shield of California Donates $25,000 After Oakland Post Burglary

The Oakland Post is the biggest Black weekly newspaper in Northern California
News Center News In the News
March 31, 2022

Blue Shield of California stepped up with a $20,000 donation to support independent community journalism after a break in and burglary March 23 at the Oakland Post office. The health plan is donating an additional $5,000 to OCCUR, an Oakland-based organization working to empower marginalized communities, after its nearby office also was burglarized. 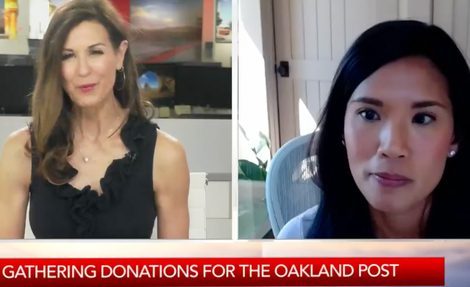 “He went into my office, the administrative office, and he ransacked our desk drawers and our files,” Paul Cobb said.

Publisher Paul Cobb says one of the suspects broke into the building while riding a bike.

They took cash, personal checks and some equipment such as a camera used by the Post’s reporters.

Cobb was disappointed to find they also stole a rare personal collection called “Blacks on the Money.”

“The face value of the money was probably no more than $2,000 but the collective value of having the complete series from each one of the mints made it more than $10,000 in value,” Cobb said.

Health insurance company Blue Shield of California learned of the incident and is donating thousands of dollars to the organizations, a company spokesperson said in an email to KRON4.

The funds will be used to help replace the newspaper’s photography staff and an audio recorder used for interviews, the spokesperson said.

“My reaction is, ‘What else is new?’ ” (Publisher Paul) Cobb said. “We have to find ways to get livable wage jobs for these guys out here in Oakland, or we’re all gonna be subjected to this on a regular basis.”

The burglar also broke into the non-profit organization OCCUR and the Greenlining Institute, which both operate out of the same building. On Thursday afternoon, health-care provide Blue Cross announced that it would donate $20,000 to the Post and another $5,000 to the OCCUR organization to help both groups recover from the burglary.

Police were investigating and had not made an arrest as of midday Thursday.