OAKLAND, Calif. (March 3, 2022) – Blue Shield of California today announced that the nonprofit health plan is participating in a national initiative with Civica to help manufacture and distribute generic insulins that will cost patients $30 or less per vial, or no more than $55 for a box of five pen cartridges – prices that are significantly less than the insulins available on the market today. 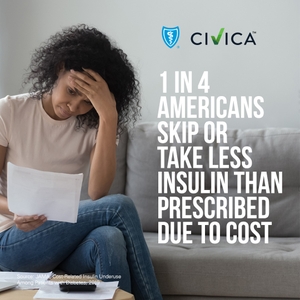 Civica’s insulin price will be transparent to all purchasers with no rebates to obscure the actual cost and the drug is expected to be available starting in 2024.

Civica is a nonprofit, generic pharmaceutical company with a mission to make high quality generic medicines accessible and affordable for everyone. Blue Shield is a founding investor of CivicaScript, which is Civica’s operating unit dedicated to lowering the cost of select high-cost generic medicines at the pharmacy counter.

The insulin initiative is supported by a wide range of health systems and health plans, including Blue Shield of California and several other independent Blue Cross Blue Shield companies.

“The high cost of insulin poses a genuine hardship to Californians with diabetes, who already bear an outsized burden when it comes to the cost of their health care,” said Paul Markovich, president and CEO of Blue Shield of California. “This initiative will put affordable insulin within reach of every Californian who needs it and help reduce healthcare spending driven by runaway prescription drug prices.”

The American Diabetes Association estimates there are more than 3 million adults in California – more than 10% of the state’s adult population – who have been diagnosed with diabetes. About a third of people with diabetes need to take insulin to control the disease, according to the National Institutes for Health. Left untreated, the disease can lead to serious health problems as well as a huge economic burden on individuals, including dangerous and expensive complications.

Diabetes also affects minority populations more seriously than others. This is particularly true for California’s large Hispanic population, who have a greater than 50% chance of developing diabetes as an adult, according to the Centers for Disease Control and Prevention. They also have higher rates of kidney failure caused by diabetes as well as diabetes-related vision loss and blindness.

“Blue Shield of California’s collaboration in this low-cost insulin program is an investment in public health in our state,” Markovich said. “We are proud to have supported CivicaScript from the beginning as part of our larger effort to ensure that quality health care is affordable for every Californian.”