Editor's note: An earlier version of this story said text message were sent to Medi-Cal members, the texts were sent to community members. The story has been corrected.

Blue Shield of California is helping coordinate an all-out grass roots effort to boost vaccination rates among its members, with a particular focus on underserved communities and people of color.

To raise the vaccination rates, Blue Shield is working on several fronts. In one campaign, the company made more than 3,600 calls in June and early July to Promise Health Plan (Medi-Cal) members who were overdue for a second shot. About 22% said they were already vaccinated. But more than half the calls resulted in a voicemail. And only 14 — 0.4% — resulted in scheduling an appointment or providing a link. 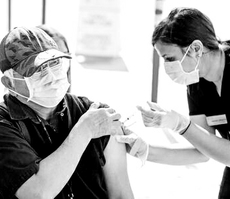 About 79% of Californians aged 12 and older had at least one shot of the vaccine as of Oct. 12, according to the state’s Department of Public Health. Yet big disparities remain with regard to race and socioeconomic status. For example, 89% of Asian Americans were fully vaccinated, compared with 65% of whites, 53% of Latinos, and 52% of Blacks, according to the state data.

The gaps in vaccination rates were also significant in urban areas. For example, in Los Angeles, 106,000 Blue Shield of California Promise members were still unvaccinated at the end of August. In San Diego, there were 26,000 people to reach. Vaccination rates among members in those cities were between 55% and 58% at the time.

Reaching out to the unvaccinated

To get more members vaccinated, Blue Shield has tapped organizations with whom it has working relationships to better reach its own members in various communities. Simply put, they’re close to their communities — pharmacies embedded in areas where the greatest concentrations of unvaccinated members live or work, and providers who are relied-on confidants. For example, in Southern California, Blue Shield is working with member organizations such as:

Blue Shield has also helped organize various outreach channels, such as opening pop-up clinics and visiting members’ homes. These organizations are also using a platform, Harmony Health, which provides community advocates and leaders a way to reach constituents in various languages and formats. With the platform, the partner organizations have been able to upload their existing content in several languages and filter their contacts lists for tailored outreach. One campaign dispatched flyers via texts to 26,000 community members, starting with an introduction of an advocate representing one of the organizations. There have also been emails sent and websites created as part of the outreach.

While the success rate is difficult to track, the work is likely to be helping get people vaccinated. Meanwhile, Blue Shield can rely on the COVID-19 vaccination incentive program administered by the state’s Department of Health Care Services. The agency is making available $100 million to motivate all Medi-Cal members to get vaccinated between Sept. 1, 2021 and Feb. 28, 2022. The funds allow Blue Shield of California Promise Health Plan to provide gift cards as an incentive to its Medi-Cal members upon completion of at least one shot.

“Challenges remain, especially in rural areas like Antelope Valley in Los Angeles County and Vista in San Diego, which are resource poor,” says Daniel Rivas, a senior manager of community health at Blue Shield. But thanks to so many different organizations lending a hand, Blue Shield of California executives believe the group effort could make a near-100% vaccination rate attainable among members.

Relying on various partners to get the word out about vaccinations is part of a broader effort by Blue Shield to find new ways to address health inequities laid bare at the onset of the pandemic, organization executives say.

Much of the infrastructure for testing and vaccination efforts has been geared to reach more affluent and educated Californians. Mega-treatment sites were located in large complexes that were built around a drive-up model in metropolitan areas, disadvantaged community members who do not have their own vehicle. Testing and vaccinations had to be scheduled online, placing an undue burden on families and communities without access to Wi-Fi and computers. The online scheduling and screening systems continued to drive a wedge between those with resources and those without them. These barriers have left behind many Californians, especially those with greater health risks.

“Historical issues such as racism, access, education, misinformation, and lack of resources have driven a disproportional impact on Blacks, LatinX, and Pacific Islander communities,” says Rivas. “Many of the resources being implemented throughout the state were not culturally relevant or community designed and did not reach our members.”

The work with community organizations by Blue Shield aims to bridge the divide. “We will continue to collaborate with our trusted partners to inform our efforts and pivot to strategies that are working,” Rivas says. “We need to remove even more barriers to access and get into institutions where our members live, work and play, instead of asking them to come to us.”

Second Opinion: What Does FDA Approval Really Mean For Vaccines? And Should I Get A Booster?