Kenneth's Story: A New Lease and a New Lease on Life With the Help of an Innovative Blue Shield of California Program

Kenneth Lee had been living out of a 1979 Ford cargo van in Galt. His fortunes changed with help from Blue Shield of California's community health advocate program, part of its Health Reimagined initiative
News Center News News Stories
By Charles Keenan
October 05, 2020 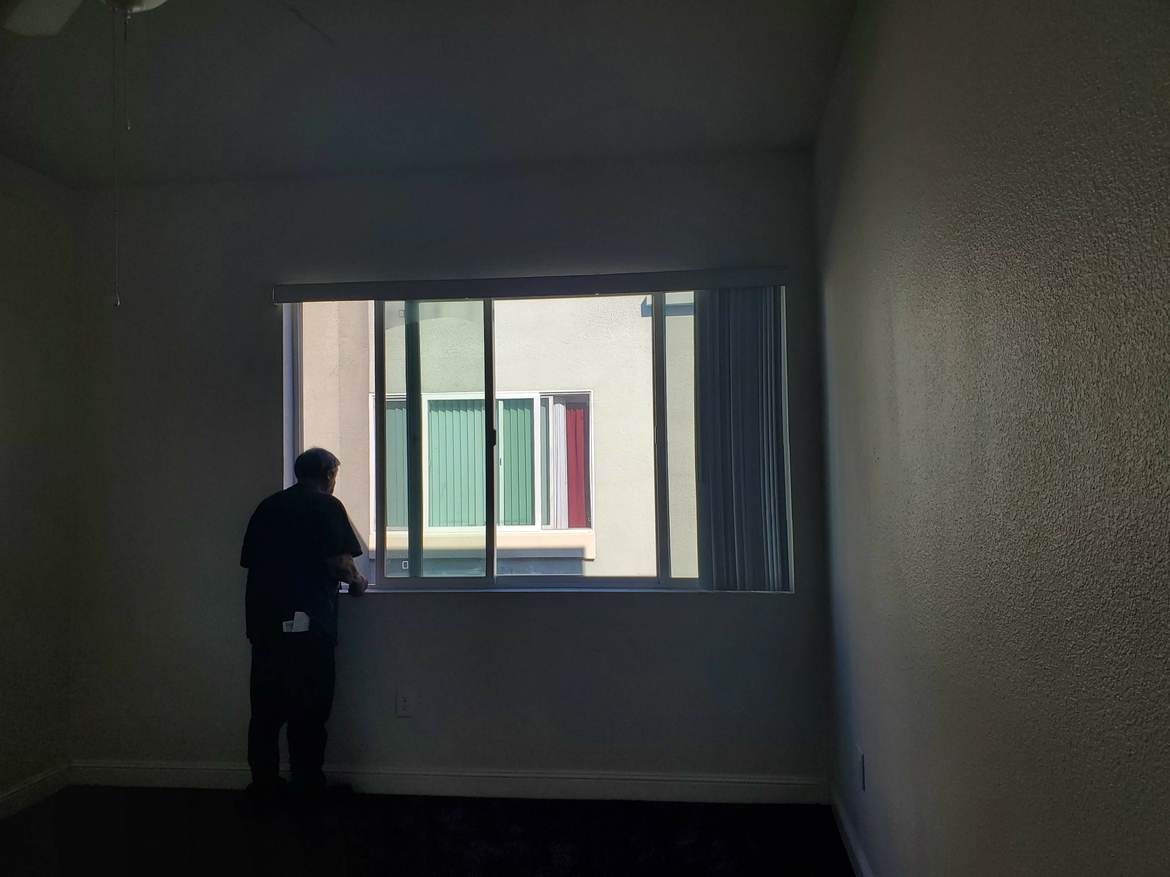 Kenneth Lee had been living in a cargo van for more than a decade. A community health advocate, part of Blue Shield of California's Health Reimagined initiative, helped him find a home.

In 2018, Kenneth Lee had been living out of a 1979 Ford cargo van in Galt, Calif., for about a decade. Methodically, he had been researching places to live, and identified an affordable senior housing apartment building in the heart of town. The location checked all the boxes: it was close to a diner, his doctor’s office, and the local food bank. The building was less than 10 years old. He would also be among other seniors, making for a quieter living environment than other low-income housing options in town.

The problem was, he faced a skeptical building manager when he approached her about availability. Where did he live? Has he ever been arrested? Was he old enough to qualify as a senior? Without a physical address, the stigma he felt was nothing new for someone without a home. He was told the waitlist was a year.

Yet Lee’s resourcefulness, tech savviness, patience, and networking skills would eventually pay off. Early this year, the 66-year-old Lee was still on the waitlist, but he had recently met someone who could lend a hand: Stuart Kosh, a community health advocate, who had started helping him find housing. Kosh had been brought on board by Lee’s primary care physician’s practice to offer patients social services.

For Lee, it meant he had an advocate in Kosh, who called the building manager of the facility to see what was going on with the delay. He vouched for Lee: how he reliably showed up for his medical appointments, how he could take care of himself, how he knew he could pay his rent, and how his documents were in order. Two weeks later, in February, Lee was given a green light for a March 1 move-in.

A lease and ‘new lease on life’

Today, Lee’s new home is a one-bedroom apartment. The air conditioning, refrigerator, and roof gave him a new lease on life, and a safer living situation. “It’s a matter of getting independence and not having to look over your shoulder all the time,” Lee said. 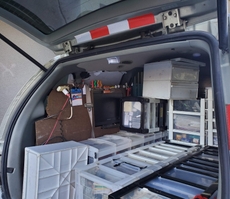 Lee’s success is both a tale in perseverance, but also of the difficulty the homeless face finding adequate housing all on their own. Housing options are limited. Bureaucratic red tape all too often overwhelms applicants, who lack basic tools such as an internet connection, a computer, and a printer.

Kosh, who has a master’s degree in social work, works with Lee and about 50 other patients on an active basis, and as many as 140 in all, sees the challenges firsthand. “The process that is required to find housing is pretty grueling,” Kosh says. “There might be low-income housing, but applicants might not have good enough credit. Or other housing might want $2,000-a- month in rent.”

Kosh is part of a Blue Shield of California program that has placed social workers in medical practices and resources centers throughout the state. The pilot program, which first started in November 2019, is part of the insurer’s comprehensive Health Reimagined initiative, examining and reinventing virtually every facet of the healthcare experience. It aims to promote preventive measures to help manage member health and identify health risks. The health advocates focus on mostly non-medical problems —social needs—that patients face, such as housing, transportation or food assistance.

The holistic approach is more than just humane: it makes economic sense too, by preventing medical conditions of patients from deteriorating. For example, in Lee’s case, having a roof over his head has helped him refrigerate his medication—Ozempic—for Type II Diabetes. Lee also recently developed blood clots in his legs, which would have required him to have been admitted to the hospital to recuperate, since living out of van would not heal the condition, Kosh noted his doctor said.

Lee became homeless in 2008, shortly after he had bought a house at auction in Stockton for $55,000. His mom died the day he moved in, and the stress eventually caused Lee to have a stroke. Hospitalized, he couldn’t fix the house to meet required inspections to fulfill his initial agreement, so he was forced to sell it for $35,000.

After he got out of the hospital, he would live out of a van for roughly 12 years. He managed to collect food stamps and went to local food banks. For clothes, he went to flea markets and thrift stores. He bought shirts with company logos, such as one from Walmart, to make people think he had a job. He used an inverter that converted his car electricity to 110 volts, and thus was able to use an air fryer and portable induction stove for cooking. He could also heat up packets of vacuum-sealed Progresso soup on his van’s windshield. “I call that solar cooking,” he says.

He also showered with solar bags made for camping. His pragmatism helped: “You can wash yourself with one bottle of drinking water too, if you don’t do the hair,” he said.

Yet all of life’s activities of daily living took an extra effort. Just the basic task of shaving was difficult for Lee. Often, he didn’t have enough power to use an electric razor, and manual blades were painful. “You can't shave because it’s rough, and you don’t have electricity,” he says. “When you don’t shave, everybody thinks you’re scroungy.”

With the stigma running deep, Lee prefers to use the term “transient,” and said: “Transient means you’re still moving around, you still have hope. Homelessness means helplessness.” 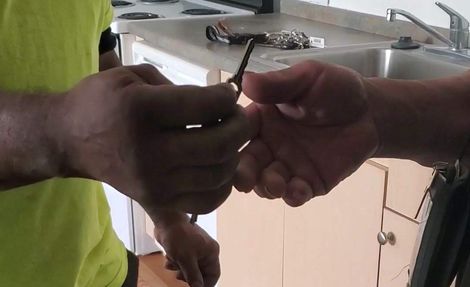 To live day-by-day, Lee also would end up choosing Galt, a city with a population of 27,000, about a half-hour’s drive south of Sacramento. The town offered a balance of enough services, with a downtown, and yet it had less traffic than bigger cities in the Central Valley. He spent much of his time at the library, where he researched his family history, including stories of how his great-grandfather immigrated in 1875 from China, and how his ancestors played an integral part in the development of canneries in the Valley.

He also targeted places to live. He put his name on the waiting list at Galt Place Senior Apartments in the summer of 2018. He took care to find the right place. “Once your moved in, you don’t want to be moving to a different place,” he said.

Lee and Kosh, after first meeting each other in November 2019 at Associated Family Physicians, the medical office, developed a mutual trust for one another. To Lee, Kosh wasn’t just some other social worker making empty promises: he seemed to care and listen. And to Kosh, Lee was incredibly resourceful.

Come move-in time, it became clear that Lee would need money to cover the $555 rental deposit, plus a pet deposit for his cat Mitsy. So Kosh organized a GoFundMe campaign, promoting it on Facebook to close the gap.

Since moving in, COVID-19 has restricted group functions for seniors at Galt Place, but Lee is keeping busy. Now, he meets with Kosh about once a week to keep tabs on his needs. Lee has a place to call home and has gotten past the stigma he first felt with the building’s management. “Kenneth’s determination, and his ability to stay focused, is what really made this happen,” Kosh says.

Letter from the Chief Innovation Officer: How an Innovation Ramp-Up Is at the Core of Health Reimagined