Some Blue Shield of California members are reporting remarkable success with the diabetes-control regimens offered under the revamped Wellvolution program introduced last year.

Members say that programs such as Virta Health and Betr Health, which feature professional coaches and support as well as online apps for monitoring food intake, weight, blood-sugar levels and other vital signs are making significant changes in their lives and helping them conquer one of the top health issues for Californians and all Americans. 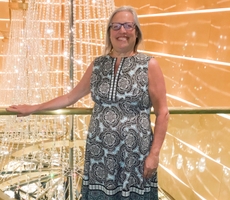 “We are actually reversing diabetes!” says Sami Inkinen, the Finnish-born CEO and co-founder of Virta Health. A world-class triathlete, Inkinen was himself diagnosed as “pre-diabetic” in 2011.

Both diabetes treatment programs focus on rolling back diabetic symptoms through nutrition and lifestyle changes rather than the traditional emphasis on managing the disease with medication. Both emphasize better eating habits. Betr Health focuses on what it calls the “brain-gut food protocol”—including a recommended food list--and works to reduce inflammation, insulin resistance and anxiety.

Virta--a Finnish word that, Inkinen translates as “power flow” or ‘current”—emphasizes an individualized approach to carbohydrate intake and nutritional ketosis—burning body fat for energy rather than carbs.

There are two types of diabetes. Type 1 is the rarer of the two, and accounts for 5%-10% of diagnosed cases autoimmune, genetic, and environmental factors are involved in the development of the diseases, which drastically curtails the ability of the pancreas to produce insulin, a hormone need to allow sugar (glucose) to enter cells to produce energy.

Claudia Miller was first diagnosed with type 2 diabetes in 1992: “It felt like there was nothing I could do. I was just going to get worse until I developed neuropathy, lost a limb, and died.” 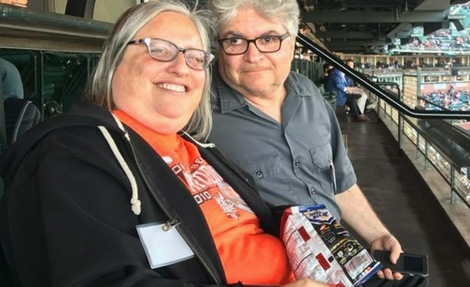 Claudia before her work with Wellvolution

She was, Claudia admits, not very good at managing her condition. She tried multiple drug combinations. Diets weren’t working. And she wasn’t exercising.

The disease continued its inexorable progression. “My bones and joints started to get painfully creaky and inflamed,” she says. “I even told my best friend that I might be dead in five years.”

Then, Claudia, who works for a San Francisco digital entertainment production company, learned about the Virta program. She was skeptical. But the Virta people (CEO Sami Inkinen calls the operation a “virtual endocrinologist’s office”) explained the science and walked her through the trying first weeks.

“It changed everything,” she says, “Now, I feel like I could live forever.”

Before Virta, Claudia’s A1c level (a common test for blood sugar, or glucose, levels) was 7.6%--normal is considered between 4% and 5.6%. She was taking three diabetes medications daily, including insulin.

Today, at age 55, Claudia has an A1c level of just 5.5%. She no longer takes any diabetes medications. And she has lost 45 pounds.

Odds Are You Either Have or Know Someone With Diabetes

Diabetes is a catastrophic public-health issue for California and the country. The chronic health condition that greatly hinders the body’s ability to nourish itself affects 9.7% of the state’s adult population, and nearly a fourth of all people over 65.

The state’s wealthier, more urbanized counties tend toward lower rates—just 6.8% of adults in San Mateo County or 6.9% in San Diego. But adults in many of the state’s rural areas are severely affected: 14.2% in Merced County, 19.4% in Lassen, 20.1% in Colusa.

Just six months ago, Tom Herschko, didn’t have diabetes but he may very well have been on the way. 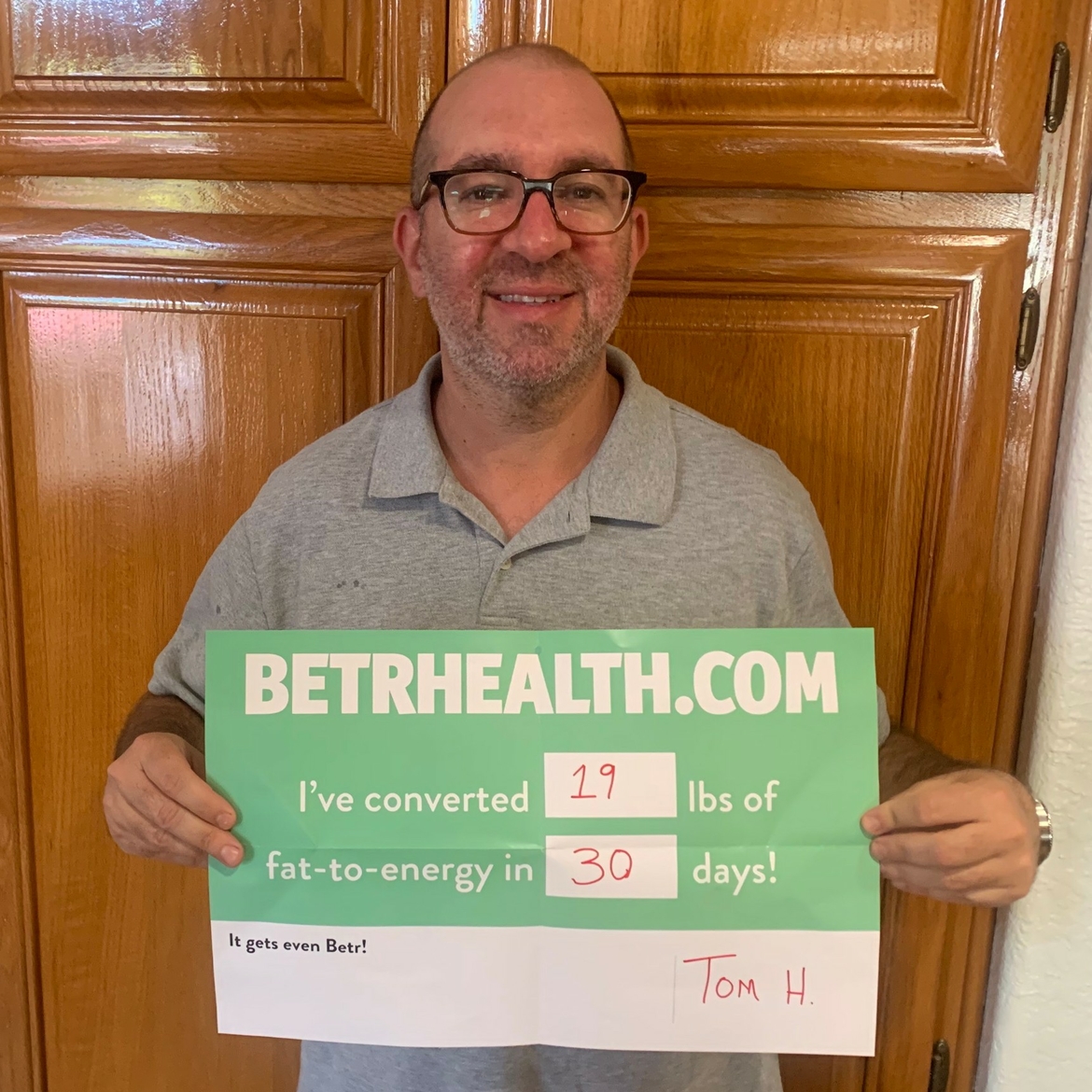 The 44-year-old Los Angeles tech-entertainment executive was overweight, his cholesterol was often dangerously over 200 mg/dl despite daily 40 mg doses of Pravastatin, his systolic blood pressure was often in the 130s and occasionally even reached in the 140s, and he had frequent rosacea breakouts. He wanted to continue to keep up with his athletic 13-year-old son.

Then he got an email from BSC encouraging him to explore some of the new Wellvolution programs. He answered the battery of questions and was directed to Betr Health’s gut healthy food immersion protocol, a microbiome reset system that has been approved by the Centers for Disease Control as a diabetes prevention program.

The program emphasizes an organic diet, what the company calls a digestive therapy protocol that repairs your gut by allowing better utilization of fats, carbs and proteins while reducing acidity, inflammation, and increasing immunity. Allowed? Grass-fed meats and eggs and most wild-caught seafood, but no salmon, turkey or pork. Fresh green beans and lentils are OK. Avoid broccoli, cauliflower and potatoes.

Tom and his fiancée Jessica agreed to give it a shot.

“We saw results very, very quickly,” Tom says. “We both have lost 30 pounds.”

Tom’s blood pressure hasn’t been over 125 in months. He has cut his cholesterol levels to the point that he is now taking just 20 mg doses, and even his skin has gotten a lot better as the rosacea, which is often linked to food and alcohol intake, has disappeared. (Indeed, he says, it was gone within a week or two.)

Tom acknowledges that the first two weeks of the Betr Health program were rough. He calls them his “de-toxing” period, but he credits the Betr Health coach and the online app for helping him get through the difficult parts and putting him on the track to, well, better health.

Diabetes Can Be A Killer

Diabetes is the nation’s seventh leading cause of death, according to the American Diabetes Assn, and is a major contributor to other health problems such as heart disease, vision loss, kidney disease, even the loss of limbs. More than 30 million Americans, or 9.4% of the population, have diabetes, with 1.5 million new cases diagnosed annually. Another 84.1 million adult Americans are classed a “prediabetic.”

And the cost to the nation is staggering: More than $300 billon a year in direct medical expenses and reduced productivity—that’s equivalent to half the cost of the entire Medicare program.

The 61-year-old owner of a premium cigar shop in Redding, Shelley was diagnosed with type 2 diabetes—just like her father, brothers and several cousins. So Shelley wasn’t exactly surprised by her diagnosis. But she felt she had failed herself, that she had brought the disease on herself through her own poor diet and other health choices.

“The diabetes was a big slap in the face,” she says. “I truly felt like a failure.”

Her A1c was 6.6%. She could feel the effects of the disease. She was sleepy and exhausted all the time, made worse by itchy skin at night, which kept her from sleeping well. The metformin the doctor prescribed caused gastrointestinal issues.

Then she got an email for BSC telling her about the Wellvolution program and Virta.

The first few weeks were difficult as Shelley’s body adapted to using fat for energy instead of carbs. Her Virta health coach right helped her through that difficult early period. She began to regularly plan our her meals, sometime days in advance.

“I never felt judged or monitored in a negative way—there was only ever support and information as I needed it.”

Within just three months, Shelley was feeling and seeing the difference. She dropped two dress sizes and cut half a percentage point off her A1c level. Her joints no longer ache, and she has more energy—enough to tackle hiking and kayaking.

What Does a Doula do? The Doula in Heels Has Answers