In the News: Blue Shield of California Recognized as Top Bay Area Company For Supplier Diversity

San Francisco Business Times names Blue Shield to its ranking to top companies. The plan is seeking to triple minority suppliers by 2023
News Center News In the News
July 15, 2019 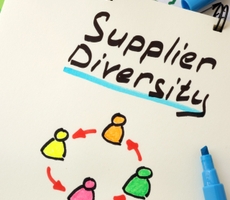 Blue Shield of California is among the Bay Area's leading companies when it comes to doing business with minority suppliers, according to a new ranking by the San Francisco Business Times. The ranking, published July 12, was

based on a company or organization's efforts to hire minority suppliers. Blue Shield has a target of tripling its number of minority suppliers to 12 percent at the end of 2023, up from 4 percent last year. According to the SF Business Times:

Companies must have Bay Area operations in the nine-county Greater Bay Area. Each participating company was required to complete a brief online survey. Each question in the survey had its own score based upon our collective determination of its importance in developing and having the most diverse and inclusive supply chain. The total score was used to rank companies in the published list. There was no fee associated with participation in the survey or publication in the Top Bay Area Companies for Supplier Diversity list.

To read the full story and see the ranking, click here.