From Hate to Great: A Veteran of 40 Years of Pride Events Reflects on How Views Have Changed in California

Mark Lawrence, a nurse with Blue Shield of California, recalls a time when the LGBTQ+ community had to fight for acceptance. Recent Pride events, he says, "were lined with people who care about you, loved you"
News Center News News Stories
By Charles Keenan
June 20, 2019

Mark Lawrence remembers all too well the hostile climate against the gay community 41 years ago.

Lawrence, a Blue Shield case management team lead, first attended San Diego Pride’s parade in 1978 as a 23-year-old. The procession, about 500 people in all, had a few floats and cars, and a few drag queens brave enough to march. While the mayor participated, there were no other politicians, and no police in the parade. As spectators, Lawrence and a friend, as is the tradition of the parade, joined the end of the procession to walk down to the site of the festival at Balboa Park. 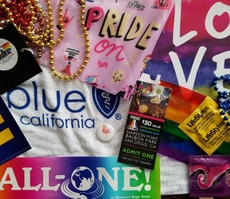 The walk was a match of solidarity vs. hostility. There were more protestors than participants, Lawrence remembers. People hurled insults and threw things at the group. Mark and the others joined hands and walked the route, looking straight ahead. “We basically all held hands,” he says. “We just walked down past them and ignored them. You didn’t want to call them names, so we didn’t. We went down to the festival, had a good time and partied, being proud to be gay.”

Lawrence’s courage and spirit carried on. He would end up going to the parade for another 30 years, until he and his husband stopped going due to ailing backs and legs—all the standing and walking became too much, he said.

Flash-forward about a decade later to 2018, when Lawrence was invited to ride in Blue Shield’s San Diego Pride float. He saw the platform would have railings that could offer a little physical support for an hours-long event, plus music and good fun. More important, he was touched by Blue Shield’s reaching out, as part of its embracing of LGBTQ+. Lawrence and his husband were in.

Compared with his first parade, the streets were packed with an estimated 250,000 spectators, but this time around they yelled cries of support. And even from the last parade they attended a decade ago, Lawrence noticed more progress had been made. On the way to the start, Lawrence and his husband passed bunches of police officers as they walked to the parade start themselves, and the two realized these officers would be marching too. Plenty of politicians were also there. And no haters were in sight.

“It was just all goodness,” he said. “The streets were lined with people who care about you, loved you and didn’t even know you. They were proud to know you for you.”

Spoken from a man who certainly knows something about goodness and caring. Lawrence, an RN, hails from upstate New York, and received his nursing degree in the 1970s. His initial plan was to move to Florida. But a good friend, in need of companionship, convinced him to try San Diego in the summer of 1977. He took to the new place. He came out in September that year, embracing his new identity, and the city became home. 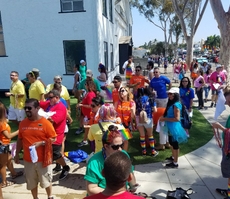 He served as a nurse for 33 years in a variety of disciplines, including skilled nursing, pediatrics, operating room, intensive care, home health, home hospice, and liver transplants. He’s worked the last 11 years for insurance companies, including his tenure at Blue Shield since 2015, when it bought his predecessor company CareFirst. He oversees a team of 10, who evaluate in-patient criteria and do discharging planning.

Lawrence, 64, makes a point of how Blue Shield, a supporter of the San Diego Pride parade, has supported LGBTQ+. The company views diversity and inclusion as cornerstones for building a great place to work, and they’re given emphasis at all levels of the company.

Blue Shield actively recruits at LGBTQ+ career events, and it has been recognized by the Human Rights Campaign Foundation as one of the “Best Places to Work for LGBTQ+ Equality.” This year at San Diego Pride, July 12-14, Blue Shield will also receive the Stonewall Philanthropy Award, given to organizations that have raised funds to support LGBTQ+ over a period of years. (“Stonewall” is in reference to the riots that followed a police raid of the Stonewall Inn in New York in June 1969, a catalyst for the movement for LGBTQ+ rights in the United States.) As an insurer, the Blue Shield covers a range of preventative and screening services for LGBTQ+ members, and it does not exclude benefits for those seeking gender reassignment. “Blue Shield respects and accepts all kinds of people for what they are,” Lawrence said.

And count Lawrence to be part of the Blue Shield float again in July. Times have changed, but the event will serve once again as a reminder that there’s also still something to fight for.  “People are people,” Lawrence said. “We all have to get along to make the world a better place.”

Pride at Blue Shield, A Journey to a ‘Limitless Life’

Mary O’Hara Recognized for Advancing LGBTQ Equality in the Workplace