Sponsorship of the center reflects the connection between health and the arts
News Center News News Stories
April 05, 2019 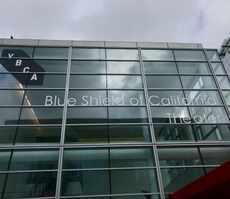 Dr. Terry Gilliland, senior vice president and chief health officer at Blue Shield and a cancer survivor, spoke about the need for refuge as he battled illness. He also cited recent research about the connection between art and health. Gilliland noted that British doctors soon will be prescribing art. He noted that 90 percent of participants in Hull, England, reported health improvement after participating in a partnership with the Royal Philharmonic Orchestra. He also said other programs in the United Kingdom were showing similar results, according to his prepared remarks.​

On March 7, Blue Shield announced that it has entered into a multi-year partnership with YBCA to raise public awareness around the relationship between active engagement with the arts and improved health and well-being for individuals and communities.

According to the announcement:

The Blue Shield of California Theater at YBCA annually presents over 300 cultural events on-site, from exhibitions to performances, film screenings, and large-scale community engagements. The 757-seat theater has two-tier seating, dual-level lobbies, a spacious stage, and a generous technical inventory. It also regularly serves as a host venue for events by blue-chip brands such as Apple, Bloomberg, Google, HP, Oracle, TED, and Vanity Fair magazine. Located at the corner of Third Street and Howard Street, the Blue Shield of California Theater at YBCA is situated at one of the most densely visited intersections in downtown San Francisco. Its main entrance and facade face the Moscone Convention Center, which increased its functional space by 42 percent with its recent expansion.

Investing in the Arts Is an Investment in Healthier Communities