Employees of PMG narrowly escaped California's deadliest wildfire as they cared for patients. They're still providing care. And, with the help of Blue Shield of California, remain committed to Butte County.
News Center News News Stories
By Matthew Yi
March 06, 2019

PARADISE, Calif., -- It was like any other fall morning in Paradise. The sun rose over the Sierras to the east, peeking through clear blue skies. Hidden among soaring pine trees the Butte County town of nearly 27,000 residents had the typical morning buzz – parents dropping off their kids at school, businesses getting ready to open their shops and doctors doing their morning rounds at the hospital.

Among them was Dr. David Russell, a pediatrician at Paradise Medical Group. 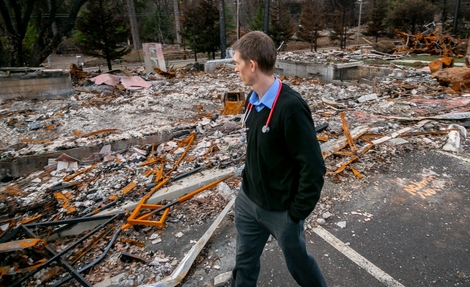 Dr. David Russell walks in front of his former office in Paradise, Calif. Russell was among those trapped in the area during the Camp Fire in November. The fire is the deadliest in California history.

Before he left his home at about 7 a.m. on Nov. 8 he knew there was a fire in the east, but he and his wife – who was 39 weeks and 4 days pregnant with their third child – had no idea how quickly the fire would reach Paradise and become California’s deadliest blaze.

By 7:30 a.m., when he was at Feather River Hospital just a couple of miles away from his home, Dr. Russell called his wife, who said ash was falling on their front yard. They decided she and their two young children should leave for safety to nearby town of Chico.

Dr. Russell stayed at the hospital, which went into full evacuation mode within the hour as hospital staff and patients were using all available vehicles – ambulances, personal cars and trucks – to flee from the fire.

After the last patient was evacuated, Dr. Russell jumped into his truck and started driving west, but he was caught in a gridlock as the entire town was fleeing the flames. The blue sky turned pitch dark as thick smoke enveloped the entire region. Homes and stores along the road were catching fire.

Dr. Russell called his brother, a firefighter. He told the doctor to leave the truck and run to safety. So Dr. Russell ran – until he saw a disabled ambulance on fire with the backdoors flung open. Inside was a woman still on a gurney. She had given birth via c-section at the hospital earlier that morning. Dr. Russell and a paramedic lifted the gurney out of the ambulance and the three fled to a nearby house where they found 13 people sheltering including the town’s fire chief, paramedics, search and rescue workers, and patients from the hospital.

They decided to make their stand at the house.

“We put the patients in the garage to keep them sheltered from smoke and embers and we defended from the fire in two different spots,” he said. “We grabbed hoses and we were spraying down the house for 1.5 to 2 hours.”

“You know in action movies where you move from one explosion to another. That was what two hours of my life was like: running down the road, finding that ambulance, sheltering, doing what you can to protect the patients in the garage,” Dr. Russell said.

The group survived the ordeal, but many at Paradise did not. More than 85 people have been confirmed dead with more than 18,000 homes, businesses and other buildings destroyed by the fire.

And Dr. Russell isn’t alone in stories of heroic efforts among the staff at Paradise Medical Group.

The medical group’s IT manager Walt Taber was among the last people to evacuate from the clinic that same morning as he went into the basement of their main building to retrieve the backup drives that contained medical records for their 10,000 patients that they’ve served and zoom out on his purple Yamaha Road Star motorcycle. 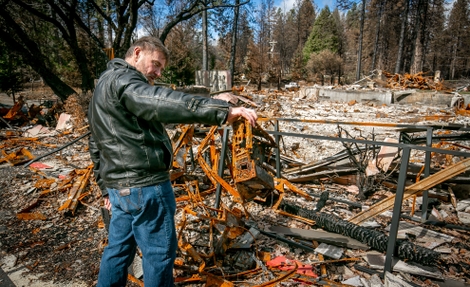 Walt Taber, IT manager at Paradise Medical Group, picks up the remains of a computer that was destroyed along with the medical group’s main clinic building in Paradise, Calif. Taber was among the last to evacuate the clinic on Nov. 8, 2018 in order to save the backup drives that contained patient medical records.

“At the time I was still thinking this place is not going to burn. This building is stucco and the servers are metal, the server racks are metal,” he said.

But once the blaze tore through the building, there was nothing left.

Despite the tragic results of the fire and the inevitable long road to recovery, Paradise Medical Group physicians and staff are not giving up on the community that they’ve faithfully served for decades.

The support includes a collaboration with Teladoc Health and Paradise Medical Group to build a new “e-visit” platform that would allow people to consult Paradise Medical Group physicians via smart phone, personal computer or telephone. It’ll be an important tool to provide care to patients have who have been displaced from their homes and dispersed throughout the region.

In addition, Blue Shield will help the medical group renovate the two smaller buildings that survived the fire so they can maximize the clinic space. It’ll be an important task considering there is now a vacuum in health care services in Paradise and nearby smaller communities. Currently the medical group is seeing patients in rented space in Chico. 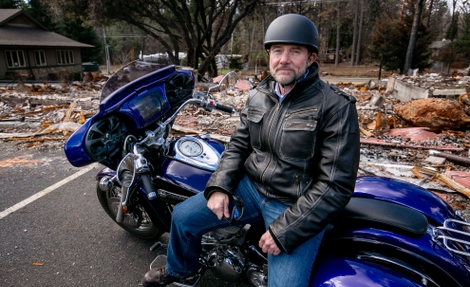 When asked why he has chosen to stay and help rebuild Paradise, Dr. Russell replied with a question of his own: “For them to have their house burn down, their town burn down, where do they go for medical care?”

He added: “Especially in (pediatrics) in Paradise and Chico where all the practices are already full and we need about six more pediatricians in the area … so, to be able to come back is important. We’ve already heard multiple times ‘we’re so glad you guys are open.’”