On the night of Dec. 6th, heavy rains sent flashfloods throughout San Diego County – and more than three feet of water into a homeless shelter. The flooding forced 324 homeless residents out of the tent shelter run by the Alpha Project, a San Diego non-profit that serves over 4,000 men, women, and children each day with affordable housing, residential substance abuse treatment and more. Making matters worse, the sewage overflowed and contaminated the residents’ belongings including their medications.

Within hours, the Alpha Project and city evacuated the residents by buses to the SDCCU Stadium where barracks were erected.  The Alpha shelter residents’ situation was now further exacerbated – not only had they lost what they called home but they had lost clothing and some were in need of their daily prescriptions.  (SDCCU, located in Mission Valley, is host to the San Diego State Aztecs and has previously been the host for several Super Bowls and World Series.)

The next morning, Carmen Katsarov sat down at her computer at the San Diego office of Blue Shield Promise Health Plan where she is the manager of social services. It wasn’t long before Katsarov’s email was filled with news about the shelter flooding from San Diego county colleagues who work together in the closely organized network of community healthcare and social workers. And soon came a phone call from Promise Health’s chief medical officer, Dr. Tanya Dansky: at least one Promise Health Plan member was a shelter resident who would be potentially without prescriptions.

Each month, Blue Shield receives electronic notice of the locations of the more than 500,000 Promise Health members who are recipients of Medicare and Medi-Cal (also known as Medicaid for low-income). Upon learning of the flooding, Dansky immediately reviewed the list to determine whether any Blue Shield member was housed at the shelter and identified the one member. Dansky said there was no question on how they would respond to the shelter flooding: “We’ve got to mobilize…roll up our sleeves and help.” 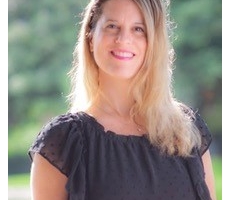 But finding one member among more than 300 now displaced homeless was a long shot. At the same time, Katsavov, a longtime licensed clinical counselor and social worker, knew that finding members who needed medication was critical. They may be diabetic or have a heart condition, she said. We were “talking about a different crisis if they need medical services,” she said.

By noon on Friday, Katsarov and her colleague, Leiloni Herrera, a licensed clinical social worker, arrived at the stadium, wearing their Blue Shield badges. For three to four hours, they walked the rows of barracks and lingered in eating areas. They introduced themselves to the displaced homeless residents and asked each if they received health insurance through what was then Care1st.

“We figured we’d hunker down for the day and help as many people as we could,” Katsarov said.

Several hundred people were evacuated from the Alpha Project homeless shelter in the East Village Thursday night due to flooding. Buses brought them to SDCCU Stadium as an emergency shelter. @10News pic.twitter.com/KxsbZ3356R

Many did not have any identification cards, Katsarov said. By pure perseverance, Katsarov and Herrera were able to find Blue Shield members. One individual pulled out a wet yellow post-it out of his wallet. Scribbled on it with his name and a Blue Shield ID number. By the end of the day, they were able to locate seven Blue Shield members who had resided at the homeless shelter including one member in medical distress who was transported to a hospital.

Epilogue: About one week after the flood, Alpha Project was able to reopen the 324-bed tent shelter.