This week, Blue Shield's veterans employee group surprised children of active-duty servicemembers with new bicyles in San Diego. We asked three members of the group to explain what being a veteran and what working at Blue Shield of California means to them:

Simon Huber, who co-chairs Operation V.E.T., is a project manager in the El Dorado Hills office, where he focuses on Care1st integration of systems, data and other tech issues. The married 31-year-old father of two young girls has been with Blue Shield of California for four years, starting in the call center before completing the Management Trainee Program. 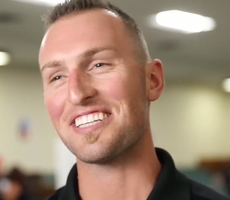 Born in Scotland, Simon moved to California at age 11. He joined the Army at 17, right out of high school, eventually ending up in one of the hot spots—just outside Baghdad in 2005-2006. He saw plenty of action, too—12-hour days searching for bad guys, chasing snipers, avoiding improvised explosive devices and doing friendly “meets and greets” with local Iraqis. “It was a crazy, hard and fast year,” he recalls. He left the Army as a sergeant and became a U.S. citizen shortly after.

Simon started trying to identify and work with fellow veterans at Blue Shield almost from the time he joined the company, so it was no surprise when he was asked to help roll out the Operation V.E.T.  group.  His interest in working with other vets goes back, he suggests, to the deep, abiding ties forged on the battlefield. Indeed, he says, that was the very best thing about his Army days: “The brotherhood you form in combat—you throw everything else aside but what really matters is who is on your left or your right. It’s a bond that stays with you.”

Air Force veteran Marty Katreeb, 33, is a senior program manager, also in the El Dorado Hills office. She has been with Blue Shield of California for two and a half years. Marty is married and has two boys. In addition to co-chairing Operation V.E.T., Marty is also active in the WL2X (Women Lead to Excellence) employee relations group. 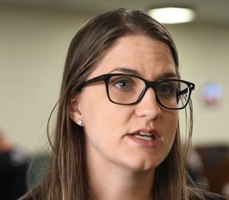 Marty spent most of her childhood in the Houston area. After high school, she joined the Air Force, rising to the rank of staff sergeant and specializing in ground radio and satellite communications. She never deployed overseas, but she punched her ticket at bases in Mississippi and Montana before her last assignment at Travis Air Force Base near Fairfield.

Marty says her participation in Operation V.E.T. is a valuable part of her working life and looks on the San Diego bike building project as a great way “for Blue Shield of California to show its support of our military communities. A military member doesn’t serve on their own.  The families and, in particular military children, make many sacrifices.  This event is a great way to give back to those families.”

And on a broader level she sees strong parallels between her Air Force and Blue Shield careers, not just in her military-bred sense of mission and duty—what she calls a commitment to “do what it takes to get a job done”—but in the powerful camaraderie of the military that transfers over to her fellow Blue Shield workers and their projects: “We don’t do anything alone in the military. You have your co-worker’s back, you have your wingman’s back. We use the same model with my team and within Operation V.E.T., too.”

Christopher Smith is the one-man tech department in the San Diego office. He joined Care1st in March, 2015, just a few months before Blue Shield of California completed its acquisition of the Southern California managed-care company. The 33-year-old information technician lives in Escondido and is married with two children, a girl and a boy. He grew up moving around in the states of the Deep South but has lived in the San Diego area since his days in the U.S. Navy.

Chris served for three years, from 2004 to 2007, spending half of that time based in San Diego and the rest aboard the USS Preble, a guided missile destroyer. He ended his service as a third-class petty officer (E4), and, after his discharge, he earned a BS degree in information technology.

It was in the Navy where Chris first took his interest in computers to a professional level. Indeed, he credits the Navy for providing him the basic training that he uses every day in his work.  Beyond that, however, he’s genuinely enthusiastic about the opportunities that the Blue Shield Care1st acquisition has created for him. “It opened up a lot of opportunities,” he says. “My hope is to move up in the ranks.”

Chris works closely with the Monterrey Park office and other IT people throughout the company. And, he says, his association with Operation V.E.T. has helped strengthen his connections with other Blue Shield employees—especially among the “brotherhood” of fellow veterans. “There are certain principles that you learn in the service,” he says, “It taught many lessons, and the camaraderie and kinship have helped shape the morals and standards that I live by to this day.”