“Really a no-brainer to invest in renewable energy that’s better for the environment, better for our health by reducing greenhouse gases, and it’s better for our business by reducing operational costs,” said Paul Markovich, President and CEO of Blue Shield of California. “We can redirect our resources towards achieving our mission of providing high quality affordable healthcare.” 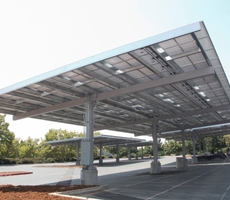 The cumulative cost savings of the El Dorado Hills solar investments over 20 years is estimated to be more than $3.5 million, compared to standard utility rates. It will also provide 954 covered parking spaces for the company’s 1,300 employees at the office complex.

Blue Shield is making measurable progress in achieving its four 2020 environmental goals, which include 30 percent of its electricity consumption powered by renewable energy and 30 percent greenhouse gas emissions reduction. With the completion of the El Dorado Hills project in 2018, Blue Shield will achieve its 2020 renewable energy goal and an estimated 22 percent greenhouse gas emissions reduction. The El Dorado Hills solar installation should help Blue Shield avoid an estimated 841 metric tons of carbon dioxide emissions on an annual basis over the next two decades, based on the U.S. EPA’s most recently published regional emission factor. This impressive reduction in carbon dioxide is equivalent to 18.4 million pounds of coal burned or greenhouse gas emissions from 41.2 million miles driven by an average passenger vehicle.