A Very Special Pride Month for a Blue Shield Family

Angelica, a Blue Shield employee, and her transgender son Rei won’t be participating in this year's Pride weekend, but the family is celebrating
News Center News News Stories
By Beth Trimarco
June 26, 2020

Since its inception in 2004, the San Francisco Trans March has always been held on the Friday of Pride weekend. Given the pandemic, Angelica, a Blue Shield employee, and her transgender son Rei won’t be participating. But their family is celebrating Pride in very special way: Rei will be undergoing female-to-male chest reconstruction surgery, known as “top surgery,” as part of his transition.

The family has been on a long journey to get to this place. 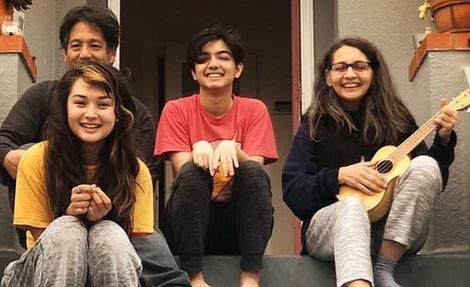 Born female, Rei describes his early years as flamboyant: “I was always so fancy,” he said. “I loved to dress up and perform, dance, sing, and act.”

His mom Angelica beamed, “Rei was so bubbly as a kid. When we’d go to garage sales, people would give us stuff for free because he was so cute. But he could also be stubborn, and that was never easy. Little did I know, I’d be in for the ‘double black diamond run’ of parenting.”

When Rei hit his pre-teens, he started dressing in a more masculine way and became more reserved. “I started to have these thoughts all the time, and became more uncomfortable being a woman,” he said. “I felt like society saw me one way, and I saw myself in another way.

“One of my classmates came out as trans, and I thought, ‘Am I allowed to do that?’ The thoughts became so intense that I told my mom I wanted to talk to someone.”

Angelica knew about gender dysphoria. She had been a member of Pride, Blue Shield’s LGBTQ+ Employee Resource Group (ERG), for several years. As part of her job, Angelica works with providers on some of these issues and she's a lifelong learner. As an LGBTQ+ ally, Angelica attended several presentations on gender. So when Rei came to her, she knew how to respond. Or so she thought.

“Rei was in tears and said, ‘mom I’m confused about my gender.’ I told him it was normal for teens to feel uncomfortable with the changes in their bodies, and everybody goes through that. But Rei knows himself. He declared, ‘That’s not really it.’ So I talked to other parents with trans kids in the Pride ERG and found a therapist who specializes in gender identity.

“The Pride ERG at Blue Shield has been huge,” Angelica added. “It’s so hard to ask for help, but Pride members reached out to me.”

After about six months of therapy, Rei’s path crystalized. “It became clear there was a huge gap between my internal identity and the external world,” he explained. “It was not a question of if I should transition to be a man, it was a question of when.

Angelica really got behind her son’s decision. “Rei was sure of who he wanted to be. Though our whole world turned upside down, I was open because I just wanted him to be happy,” she said. “But I knew that to support Rei, I needed support too. So I went to parent support meetings.”

Rei and his family agreed to take things step-by-step. He began fully presenting as a boy. Then he started testosterone. And then finally, the family discussed his top surgery. With Rei starting college in the fall away from his family and support system, they made a decision to have the surgery now so he could go to school with a fresh start.

“The surgery was scheduled for April, but then COVID happened,” said Angelica. “Rei was devasted. Not only would the surgery be postponed, but he was not going back to high school to see friends, have final performances, or attend graduation.

Rei is a 2020 high school graduate, and studied music since 6th grade. Though he is a gifted vocalist, he wants to pursue entomology--the study of insects--and Japanese language.

Angelica is proud of the man he’s become. “One thing Rei always said to us was, ‘I’m still the same person.’ Watching him flourish, I now understand that. He’s actually a better person because he’s fully himself.”

Rei credits his positive transition experience to having a close family. “My parents have supported me so I can just live my life authentically. Not all trans kids have that.”

Ironically, when the family got the call to reschedule Rei’s top surgery, it fell on the day of the Trans March.

Angelica says that surgery is part of an ongoing journey, but her family has really hit their stride. “Someone in a support group told me there will be a day that your child’s gender is not the biggest thing. That day is here, and his transition is no longer our laser focus. Rei just is. He’s got so many other parts of himself to explore in his journey. I can’t wait to see what he does next.”

Blue Shield of California has seven Employee Resource Groups in which employees come together to network, learn, and engage in the community.

From Actively Recruiting LGBTQ Talent to Prioritizing LGBTQ and Other Diverse Suppliers, Blue Shield of California Celebrates SF Pride in June and All Year Round

From Hate to Great: A Veteran of 40 Years of Pride Events Reflects on How Views Have Changed in California